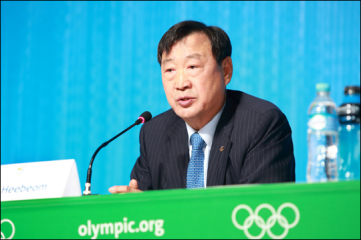 Hee-beom Lee, the president and CEO of the PyeongChang Organising Committee for the 2018 Olympic & Paralympic Winter Games (POCOG)

It took three attempts, but the Republic of Korea finally succeeded in its bid to host a Winter Olympic Games. With the PyeongChang 2018 test events now complete, Mike Starling looks at the final preparations ahead of February next year

Ask any elite athlete what it takes to win an Olympic title and you will probably hear an answer including words such “hard work”, “lots of training” and “perseverance”.

Well, the same thing can be said for any city or country bidding to host a summer or winter Olympic Games.

After missing out on both the 2010 and 2014 events, the Korean county of PyeongChang finally won the bid for the 2018 Winter Olympic Games when it secured 63 votes compared to Munich (Germany) 25 votes and Annecy (France) seven votes in the 2011 IOC election.

In both the 2010 and 2014 bids, PyeongChang actually won the first stage of voting but lost out in the final rounds to Vancouver and Sochi by three and four votes respectively.

Losing once may be tough, losing twice may be soul destroying, but the Korean Sport & Olympic Committee were not going to give up on its Olympic dream easily. So once PyeongChang finally secured the bidding rights the organising committee was going to make sure that the “third time is a charm” – especially for its long-term sporting and social legacy plans.

A major test for Korea

Thirty years since the capital city Seoul held the Summer Olympic Games of 1988, Korea is preparing to welcome back the Olympic movement in February.

In order to be ready for 2018, a rigorous testing schedule under the “Hello PyeongChang” banner has seen the delivery of 25 test events (20 Olympic and five Paralympic) since February 2016 with thousands of athletes competing at 12 competition venues.

Speaking to Host City, Hee-beom Lee, the president and CEO of the PyeongChang Organising Committee for the 2018 Olympic & Paralympic Winter Games (POCOG), explained the importance of learning from the test events.

He said: “Overall the hardware [venues and infrastructure] and software [operational know-how, sponsorship and promotion] preparations are progressing as the POCOG team, Gangwon Province and the Central Government continue to work closely together.

“The average completion rate for six of our new competition venues is 97%. For our non-competition venues, construction is also well underway and we expect them to be completed by September 2017.

“Even with the end of the test events, our team will still use opportunities from milestone events and other activities to further fine-tune the Games preparations to ensure we can deliver the best Olympic and Paralympic Winter Games in 2018.”

Thirty years after Seoul 1988 put Korea on the global sporting map, PyeongChang 2018 has the potential to do the same again for winter sports. Lee added: “We saw the impact of the Summer Games back in 1988 on Korea and the perception of Korea by the outside world and we know that 30 years on the Winter Games can do the same for the country.”

Progress and legacy of the venues

The 2018 Winter Olympic Games will see events held in two main clusters in the Gangwon-do province – the PyeongChang Mountain and Gangneung Coastal clusters.

Located in the north-east of the country, the mountainous Gangwon-do province has multiple ski resorts and national parks. A key factor to the hosting bid was that all PyeongChang 2018 competition venues are within 30 minutes’ driving distance from the PyeongChang Olympic Stadium.

POCOG’s president Lee said: “Out of the six brand-new competition facilities, four have been completed and two are still on-going. As for the non-competition venues, they are well on track for completion.”

In the long-term, the 2018 venues will have a lasting legacy for Korea’s elite level sportsmen and woman and also its residents. “We have developed a post-Games venue legacy plan to keep the Olympic spirit alive,” said Lee. “The venues for PyeongChang 2018 have been designed as much around what happens after the Games as during it. These world-class facilities will serve communities and athletes for years to come.

“Many of the competition venues will continue to be used by athletes from Korea and all around Asia. The Sliding Centre [will be used] by the Korea National Sports University, Gangneung Hockey Centre by the new Daemyung ice hockey team and Alpensia Sports Park for Nordic skiing.

“Other venues will be open to the public and benefit the local residents. Ice arena as a multi-use sport-for-all facility and the Kwandong Hockey Centre used by the university.”

While the sporting venues are either complete or in the final stages of construction, there’s also much work being done to make sure athletes, officials and visitors can easily access the games.

Transport links between Seoul and the games clusters have had huge upgrades and improvements as part of PyeongChang 2018’s long-term legacy plan. New motorways and high-speed railway are among the major projects.

“Looking at transport, the constructions of the high-speed railway, expressways and the road networks are on schedule,” said Lee. “The 2nd Yeongdong Express Highways was completed last year. We have seen great improvements in the traffic flow from Seoul to PyeongChang as congestions have been reduced. There is also an increase in traffic with more people driving into PyeongChang.

“The high-speed railway will be completed in June this year and it will undergo thorough testing throughout the rest of the year. Once completed, people can travel easily from Incheon Airport to PyeongChang and Gangneung in just 98 minutes and 113 minutes respectively.

“This is great news for those travelling from Seoul who can now reach PyeongChang with ease and at a much shorter time – around 70 minutes via train and within two hours by car. The transport system will make the Games very accessible to many people.”

The POCOG transportation system for spectators includes a total of three transport malls (Jinbu and Hoenggye Mall in the Mountain Cluster and North Gangneung Mall in the Coastal Cluster) and 10 parking lots with a total 11,170-car capacity.

Dedicated free shuttle buses will be also provided to the public from the transport malls in the mountain and coastal clusters to the various Olympic venues.

The PyeongChang 2018 Winter Olympic Games marks the start of a memorable six years for Asian sport as the first of three Olympic events scheduled for the region, with Tokyo 2020 and then Beijing 2022 taking over the baton.

But while the 2018 games will again put Korea in the spotlight, the event is as much for Asia as it is for the republic.

“We have realised our dream by being given the honour of hosting the 2018 Games and we are now working hard to bring that dream to life,” said Lee. “We want to create many more life-changing experiences and open up new horizons for everyone that will be touched by the Games.”

Grassroots sport is one sector that POCOG and the local authorities have focused on since winning the bid. Schools have been engaged by the POCOG education department to create lesson plans and multi-media materials for teachers to deliver to students so they are given the opportunity to take part in the Olympic movement by participating in competitions and try out different sports. This education programme will grow in the months leading up to the 2018 Winter Olympics.

Another initiative launched by POCOG is its ‘Dream Programme’, which began in 2004. POCOG’s aim with the programme is to promote winter sports at grassroots level but on an international scale.

Lee said: “The aim of this programme is to offer young people from countries that lack the natural environment for winter sports, the opportunity to experience winter sports and advance the Olympic and Paralympic movement worldwide.

“A total of more than 1,500 people from 83 countries have participate in this programme by this year. We want to engage the younger generation and get more of them involved and excited by winter sports.”

With sporting and social legacy plans now in place one of the major industries that is looking to capitalise on the 2018 Winter Olympics is Korea’s tourism sector.

From the upgrades in venues and facilities to the new transport links, POCOG is working with government departments such as the Korea Tourism Organization to promote the country as a winter sports destination – not just in the run-up to next year, but also in the years after the event is held.

Lee said: “With the ‘New Horizons’ vision, we aim to develop winter sports and relevant industries in Asia, leaving a lasting legacy in the host region by transforming PyeongChang and Gangwon Province into an Asian winter sports hub and year-round tourist destination. This is part of the sporting legacy of POCOG 2018.

“The Gangwon province has the potential to go from a small region in Korea into a hub of winter sports. Its proximity to Seoul is a really strong selling point making the slopes and snow more accessible for everyone, especially with the new transport links that are currently being developed.”

Seunghyun Hwang, director of the Korea Tourism Organization in London, agreed that PyeongChang and the Gangwon-do province have the potential to be a winter sports hub. But Korea can also, according to Hwang, play a huge part in the run-up to the 2022 Winter Olympics in Beijing.

“North Asia is quite lucky that in the two years after PC2018 there will be the Tokyo summer Olympics and then Beijing 2022, which gives our region a huge opportunity to solidify North Asia as a winter and summer sporting hub,” said Hwang. “The 12 venues and the Gangwondo province as a whole will become ideal training camps for athletes ahead of 2022. Asia is likely to see a major winter sport increase over the coming years with both 2018 and 2022 putting spotlight on region.

“The fact that Korea tried to get the Winter Olympics in 2010, 2014 and was successful for 2018 means there has been much time to create such things as a ‘ski school’ to encourage the best young Asian ski athletes from across South East Asia to get involved in elite [and amateur] and encourage a new generation to these type of sports.”