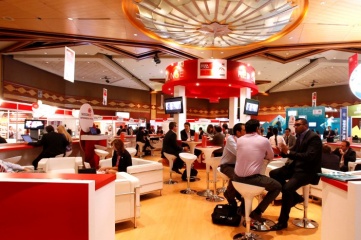 Soccerex has announced that the Asian Football Confederation (AFC), Royal Jordanian Airlines, PepsiCo and the Jordan Tourism Board have committed to the Soccerex Asian Forum, which takes place from 13-14 May on the banks of the Dead Sea in Jordan, in partnership with the Asian Football Development Project (AFDP).

Royal Jordanian Airlines – voted Airline of the Year by Air Finance Journal in 2007 – is now the official airline partner of the Forum. PepsiCo, the official sponsor of the AFC, and the Jordan Tourism Board have signed up as official event supporters.

Pepsi (PepsiCo) will act as official drinks supplier of the event while the Jordan Tourism Board will sponsor a social evening taking place at the Marriott Dead Sea Spa & Resort on Tuesday 13 May.

“We are very excited to bring this impressive selection of global brands to the event,” said Soccerex CEO Duncan Revie. “These are first-class organisations that bring the sport and the community together, and we believe will help Jordan and the rest of the continent become a destination for the global industry and soccer fans alike for many years to come.”

The local organising committee of the 2015 Asian Cup will be partnering with Austrade, the Australian Trade Commission, to host Café Australia, the networking hub at the heart of the exhibition hall.

Australia is joined by India, Korea and other Asian federations, demonstrating the Asian Forum’s status as a significant gateway to Asia for the global industry. In addition to national associations, a number of premier footballing institutions including FIFA, The Supreme Committee for Delivery & Legacy, The FA, La Liga, Real Madrid, Liverpool, Manchester United, Barcelona, the Japan Football Association and Galatasaray, have signed up for the event.

The AFC is also involved in the content of the event, updating delegates on the delivery of the Cup in a panel dedicated to major events. AFC Vice-President Moya Dodd will provide an outlook on the issues surrounding women’s football in Asia.

The Forum, held in partnership with the AFDP founded and chaired by HRH Prince Ali Bin Al Hussein, brings together leading figures from the world of Asian football as well as other international football experts to discuss the development of the game across Asia. The conference agenda includes a review of the opportunities and challenges facing Asian football.