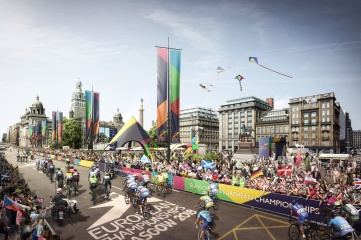 A Cultural Festival will take place in Glasgow and Scotland, it was announced on the “500 days to Go” milestone for the 2018 European Championships

Communities across Glasgow and Scotland are set to come alive in the summer of 2018 as part of a vibrant Cultural Festival being developed to run alongside the Glasgow 2018 European Championships – an exciting new multi-sport event that brings together some of the continent’s leading sports.

Glasgow’s iconic George Square will be the beating heart of the activities, bringing the city centre to life as a creative hub showcasing the very best of Scottish and Glaswegian culture. The city’s renowned Merchant City Festival, will also become an integral part of the celebrations in the summer of 2018.

The Men’s and Women’s Road Race events at Glasgow 2018 will also pass through George Square, providing a stunning backdrop for one of the key sporting moments during the Championships and further enhancing the city centre activation plans.

Glasgow will also work in close collaboration with 2018 European Championships co-host Berlin to highlight the considerable creative expertise of both cities in a ground-breaking cultural partnership. At the same time Glasgow will also work with partner Local Authorities ensuring that communities across the country are part of the celebrations.

This partnership will create a new event on the world stage elevating the status of European Champions and attracting a potential television audience of up to 1.03 billion across the continent, with a wider audience via digital platforms. Attendances across Glasgow 2018 are expected to be in the region of 250,000.

Staged alongside the elite sporting competition (2–12 August 2018), the action-packed programme of cultural activities will capitalise on Glasgow and Scotland’s international reputation for creative and artistic excellence and secure the cultural legacy of the Glasgow 2014 Commonwealth Games across four key themes:

·        The 150th anniversary of the birth of Charles Rennie Mackintosh

The cultural programme will work across all platforms including theatre, dance, music, digital, comedy and visual arts performances, bringing communities to life alongside the 11 days of world-class sporting action.

The announcement coincides with the “500 Days To Go” milestone with further information on how arts organisations and local communities can become part of the cultural celebrations to be confirmed over the coming months.

Paul Bush OBE, VisitScotland’s Director of Events, said: “The Glasgow 2018 European Championships are a direct legacy of Scotland hosting the 2014 Commonwealth Games and The Ryder Cup. The Cultural Festival secures the legacy further and ensures Scotland continues to be recognised as a global leader in the delivery of sporting and cultural events. EventScotland is proud to be part of the team helping deliver the Championships that will once again show Scotland as the perfect stage for events.”

Dr Bridget McConnell, Chair of the Glasgow 2018 European Championships Board, said: “Glasgow is Scotland’s sporting, creative and cultural powerhouse and we know how to celebrate in style. During the Glasgow 2018 European Championships the city and nation will, once again, come alive with a fantastic celebration of our finest artistic talents. We’re counting down the days until Glasgow shines once more on a global stage.”

The Glasgow 2018 European Championships will build on Glasgow and Scotland’s reputation for hosting world-class sporting and cultural events including the 2014 Commonwealth Games and Ryder Cup, Radio 1’s Big Weekend and the MTV European Music Awards. Pre-registration for priority access to tickets currently available at www.glasgow2018.com for a limited time.