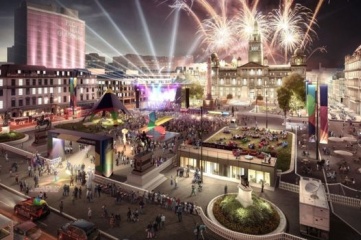 Tickets for the Glasgow 2018 European Championships are now on sale, with attendances of around 250,000 expected at venues in Glasgow and Scotland next year.

Tickets for the Glasgow 2018 European Championships are now on sale, with attendances of around 250,000 expected at venues in Glasgow and Scotland next year.

Glasgow 2018, which brings together the existing European Championships for Aquatics, Cycling, Gymnastics, Rowing and Triathlon along with a new Golf team championships, will be a new highlight on the global sporting calendar and the biggest sporting event hosted in Scotland since the Glasgow 2014 Commonwealth Games.

Commonwealth and European champion swimmer, Ross Murdoch, who has been named as the first Glasgow 2018 sporting ambassador, joined young people from across Scotland at a sporting street carnival in Glasgow’s Buchanan Street to celebrate tickets going on public sale.

He said: “I’ve got such great memories of competing in Glasgow – the fans really are something else and that really brings out the best in athletes. You always want to perform in front of passionate fans in packed venues and that is what you get when you compete in Glasgow. It is an unbelievable place to perform in.

“And that is what will make the Glasgow 2018 European Championships so special. The fans really get behind you and take you to the next level. I have no doubt that will be the case next year and that Glasgow 2018 will be one of the best sporting events ever staged in this country.”

Fans can buy tickets for 84 sessions of sport starting at £10 for adults and £5 for under-16s and over-60s. There are also a number of free events including the Cycling Road Race and Open Water Swimming, ensuring that as many people as possible have the opportunity to witness sporting history on their doorsteps.

Paul Bush OBE, Director of Events, said: “Scotland is the perfect stage for events and next summer the stage is set for 11 days of fantastic competition across six sports. The Glasgow 2018 European Championships will be an incredible event, building on the legacy created by the 2014 Commonwealth Games and The Ryder Cup, and giving everyone the chance to once again see world-class sport on their doorstep. Don’t miss your chance to be part of the action. Get your tickets now before it’s too late.”

The Glasgow 2018 European Championships is delivered in partnership with several leading European sports federations with support from the Scottish Government and Glasgow City Council and will build on the legacy of events including the 2014 Commonwealth Games and 2015 World Gymnastics Championships. The event is also backed by a number of partner local authorities from across Scotland.

Minister for Sport Aileen Campbell said: “We know the passion and support shown by fans in Scotland helped to make both the 2014 Commonwealth Games and Ryder Cup a huge success and we want that replicated across the country next year.

“We are expecting a quarter of a million people to turn out and cheer on some of the world’s top sporting talent at events across Scotland and I encourage anyone who wants to be there and experience that famous Scottish welcome to get their tickets.

“2018 will be a hugely special year for Scotland, as it is also the year we celebrate the Year of Young People, and it doesn’t matter whether it’s one of your favourite sports or not – it’s all about getting involved, seeing what other sports are out there and being part of an event which will showcase Scotland to the world.”

Councillor Susan Aitken, Leader of Glasgow City Council, said: “Glasgow is a sporting city like no other. We are known all across the world for our passionate fans and warm welcome and nowhere will that be more evident than at the Glasgow 2018 European Championships which will see Glasgow once again take centre stage.

“Glasgow 2018 will be a truly historic sporting moment as Europe’s very best athletes go for gold in our magnificent sporting arenas. With attendances of up to 250,000 expected across all six sports it will be an unmissable event, with fans encouraged to book early to avoid disappointment.”

More than 3,000 of the best athletes on the continent will compete at Glasgow 2018. The action will take place in 12 venues across Scotland including Glasgow’s iconic SSE Hydro (Gymnastics), Edinburgh’s Royal Commonwealth Pool (Diving), Strathclyde Country Park (Rowing and Triathlon) in North Lanarkshire and the Gleneagles PGA Centenary Course (Golf) in Perth & Kinross.

A number of free events – including the Cycling Road Race through the streets of the city and beyond, Open Water Swimming at Loch Lomond and The Trossachs National Park and Mountain Bike at Cathkin Braes – will also take place, giving as many people as possible the opportunity to witness sporting history on their doorsteps.

A vibrant cultural festival, with Glasgow’s George Square at its beating heart, will also run alongside the sporting action, bringing local communities across the country to life with a celebration of Scottish and Glaswegian culture. Themes from the national Year of Young People in 2018 will also run through the programme.

Glasgow 2018 will take Scotland’s sporting reputation to the next level and with a potential television audience of up to 1.03 billion across Europe set to watch the action, Glasgow and Scotland will again shine in the global spotlight with the event being covered by free-to-air broadcasters across the continent including the BBC.

Tickets for all events can be purchased from glasgow2018.com/tickets and will be sold on a first come first served basis, with fans encouraged to book early to avoid disappointment. Those lucky enough to secure a ticket will see athletes from 52 nations compete in a bid to be crowned European champion.