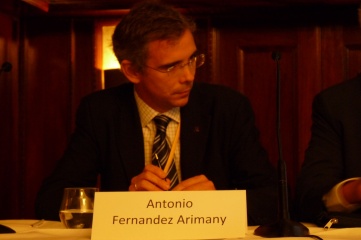 Antonio Fernandez Arimany, DG of the ITU, spoke at HOST CITY Bid to Win and is set to return to HOST CITY 2015

Speaking exclusively to HOST CITY, the leaders of the European and International Triathlon Unions said the new 2018 European Sports Championship will massively increase the reach of the sport – and that Glasgow will be a great host

The European Sports Championships, which will bring together triathlon, swimming, rowing and cycling for the first time in Glasgow in 2018, is set to be a major boost to the profile of the sport due to the broadcast reach of the new multi-sports event, the leaders of the International and European Triathlon Unions told HOST CITY.

Expectations are also high of the host city of Glasgow.

“The reason we the ETU are so excited about Triathlon being part of the ESC in Glasgow 2018 is the opportunity it gives our sport to reach a much wider audience than we can possibly achieve on our own,”Renato Bertrandi, president of the European Triathlon Federation told HOST CITY.

“Joining up with other major sports like swimming, rowing and athletics means that we can benefit from the power of aggregation. Collectively we become attractive to the EBU and their support means that we will be able to reach the living rooms of television viewers in all European countries.

“At a stroke this event will dramatically increase the profile of triathlon. In particular the screening of our innovative mixed team relay event will serve to enhance its credibility and help to cement its place in future Olympic Games programmes."

Hosting triathlon events will be one of many hot topics at HOST CITY 2015, with Antonio Fernandez Arimany, director general of the International Triathlon Union (ITU) to speak there again after the great success of HOST CITY Bid to Win in 2014.

“ITU, together with our European Continental Confederation, are supporting this 2018 EU Championships because triathlon is a growing sport and our strategy is to be present in all important multisport competitions,” Arimany told HOST CITY.

“Also the 2018 EU Championships will provide the sport of triathlon an important promotional platform of the sport, since TV broadcasting will be done around all the EU.”

The European Sports Championships also features athletics, which will take place in Berlin’s Olympic Stadium at the same time as the multi-sports events in Glasgow. The opening ceremony will also take place in Glasgow.

Arimany said he expects the event to be organised very well by its Glasgow hosts.

“Regarding our expectations with Glasgow, we are very confident that the organisation will be on a very high level, because of the experience of Glasgow with the Commonwealth Games in 2014 and also because the British Triathlon Federation is involved in the delivery of the event in Glasgow.”