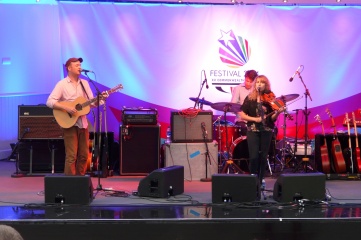 Glasgow 2014 put on a massive programme of free cultural events, such as James Yorkston at the Kelvingrove bandstand (Photo: Host City)

The 2014 Commonwealth Games were predicted to cost £472m to host, but the organising committee has announced that around £25m of previously committed public funds have not been required.

While the final budget will not be confirmed until the organising committee’s closing accounts are completed early in 2015, its chairman Lord Smith of Kelvin said that Glasgow 2014 was set to conclude its operations significantly within budget.

“It gives me considerable pride to now be able to say that Glasgow and Scotland have made Games history…. and have done so well within budget,” he said.

The surplus will be invested into physical, economic and social regeneration, said Scotland’s First Minister Alex Salmond. “We have already announced that £6 million will go into Scotland’s first ever para-sports centre and £2 million will support our successful Legacy programme.

“The remaining funds will be invested back into Scotland’s health service. It is clear that the benefit of the Glasgow 2014 Commonwealth Games will be felt in Scotland for generations to come.”

1.3 million tickets were sold for Glasgow 2014, with an attendance record of 171,000 reached for Rugby Sevens.

“Glasgow 2014 and Games Partners are to be warmly congratulated on their prudent and responsible approach to the delivery of what was an outstanding and joyful Commonwealth Games,” said HRH Prince Imran, President of the Commonwealth Games Federation.

“Glasgow and Scotland’s Games has set bold new benchmarks, energised and inspired the Commonwealth sports movement and invested in developing a long-term legacy which will benefit a wide range of people and communities for many years to come.”

The event set new standards in sustainability management, being the first Scottish event or Commonwealth Games to be awarded the ISO 20121 – the gold international standard in sustainable event management.

“The Glasgow 2014 Commonwealth Games raised the bar in so many ways, from preparing the venues, hosting the competitions, ceremonies and cultural programme and on to the legacy that we are currently enjoying,” said Councillor Gordon Matheson, Leader, Glasgow City Council.

“So it’s no surprise to find that all the previously-committed public funds were not required. Once again we have been shown to be a world-class city capable of organising events in the best possible fashion.”