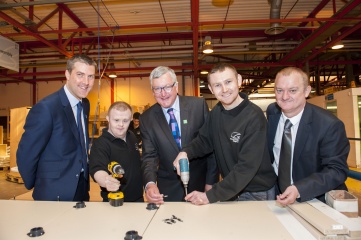 Five contracts amounting to £1m (US$1.7bn) have been awarded by Glasgow 2014 to Scottish companies employing people with disabilities

Glasgow-based RSBi will provide a logistics workforce and handle materials for the Athletes’ Village. RSBi have also been awarded a contract for a specialist package including supply, installation and removal of curtains and blinds in the residential accommodation of athletes and team officials.

Dovetail will provide 7,500 single size mattress protectors while Haven will supply around 17,000 laundry bags for the Village. North Lanarkshire Industries (previously known as Beltane) will distribute baton-bearer uniforms for the domestic sector of the Queen’s Baton Relay, as well as being contracted to provide 7,500 pillows for the Athletes’ Village.

The supported business sector in Scotland provides employment to people with disabilities and a potential pathway into the open labour market. It employs around 1,000 people and generates a turnover of more than £32m (US$54m)per annum.

“The £1 million boost to Scottish supported businesses - on top of the 73 per cent of Games related contracts already secured by Scottish companies - is a perfect example of Scotland’s success in competing on the world stage,” said Fergus Ewing Minister for Energy, Enterprise and Tourism.

“By helping people with disabilities to maintain and improve their overall independence and wellbeing, this announcement also reflects the crucial role supported businesses have in building a healthier and fairer Scotland.”

According to Paul Carey, Glasgow City Council’s convener of the regeneration and the economy policy development committee, Glasgow businesses and organisations have won more than £180million of Games-related contracts so far. “This is a tremendous economic legacy for the city,” he said.