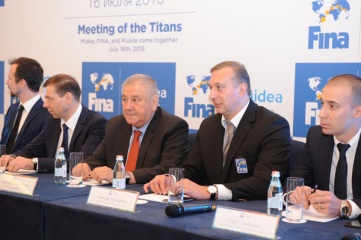 FINA’s partnership with China’s Midea, set to run to 2017, will increase the popularity of its aquatics events in China and boost Midea’s brand in Russia

For Midea, the partnership brings access to the Russian market through FINA’s flagship event.

“We are very excited by the increased involvement of Midea and the sponsorship activation deployed for the World Championships in Kazan,” FINA Executive Director Cornel Marculescu said at a press conference in Russia.

“Being a Chinese partner, this association will also enhance the popularity of these two events in a key market for FINA, where our six disciplines have a long standing tradition."

Midea is using the event to launch their brand in Russia.

General Manager of Midea Russia, Mr. Alexey Obukhov, said: “Midea is certainly one of the biggest producers in the world, and while our launching product range here today appears modest in comparison to what we sell in other markets, today’s conference is also to give everyone a clear idea about the future for Midea in the Russian market.”

Midea, a Forbes 500 company headquartered in China, is a leader in developing and manufacturing domestic appliances. As well as Russia, the company has its sights on Argentina, Chile, Brazil, Canada, the US, Egypt, India, Russia, Belarus and Southeast Asian countries for future development.