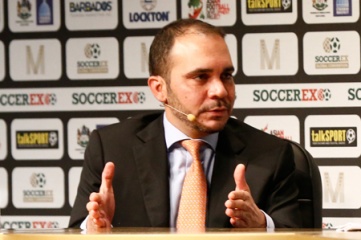 FIFA vice president Prince Ali is building his campaign by speaking to the press and FIFA members (photo: Soccerex)

Prince Ali Bin Al Hussein has revealed plans to instigate a programme of reform at FIFA, which he says must show there is nothing to hide

Prince Ali Bin Al Hussein of Jordan has kicked off his bid for the FIFA presidency by telling media that the organisation must become more transparent.

In his first interview since announcing his candidacy, Prince Ali Bin Al Hussein also announced plans to begin a ten year programme of reform, while stating he would not necessarily want to hold the position of president “long term”.

Speaking to the BBC, Prince Ali pointed to weaknesses within the current framework without directly attacking the other candidates Sepp Blatter and Jerome Champagne, in line with his promise to run a positive campaign.

"Fifa as an organisation tends to be a bit secretive, but we should be confident and happy to be open and engaged with everyone,” Prince Ali said on Saturday.

Prince Ali was a key figure in the push for FIFA to publish its report into alleged corruption.

"I was the first to ask for the Garcia report to come out. We should have nothing to hide.

"I don't see a reason to be guarded. We have to bring the administration of sport into the current time we live in. I want to bring back that confidence.

"I believe we should be totally transparent.”

The move to making FIFA more transparent is part of a wider campaign to transform FIFA.

"Reform is crucial,” he said.

This emphasis on reform has echoes of the recently approved Agenda 2020 programme at the IOC, of which Prince Ali’s older brother Prince Feisal is a member.

"I will look to a 10-year programme for the organisation where everyone is a part of it, and ourselves as the executive committee will implement it.”

In contrast to the lengthy terms served by current president Sepp Blatter and his predecessor Joao Havelange, Prince Ali told the BBC the role is "not something I want to do long term,” adding "A lot of things can happen and I'm confident we can [reform] in quick time."

He plans to build his manifesto through discussions with FIFA members.

"In the coming months, I will be looking to sit down and talk to all our member associations and listen to them.

"I'm not coming in to dictate. I have my ideas and progress I want to implement, but I have to hear back from my colleagues.”

Prince Ali’s campaign has been undermined by the assertion on Friday by Shaikh Salman bin Ebrahim Al Khalifa, president of the Asian Football Confederation that all 46 AFC member associations will vote for Blatter.

His ability to run FIFA has also been called into question by his competitor Jerome Champagne, who told the BBC “Last year he lost the election in Asia, so if you don't have a base in your own region and own continent, how can you be expected to be elected at the world level?"

FIFA’s longstanding president Sepp Blatter on Friday welcomed Prince Ali entering the election race, telling Swiss newspaper Le Matin: "I can only rejoice in this nomination. We are a democracy, and this can only be beneficial for debate.

"And do not they say that win without peril is to triumph without glory?"

The president will be elected on 29th May at the FIFA Congress.

According to the FIFA website, “In the spirit of true democracy, each national association has one vote, regardless of its size or footballing strength.”