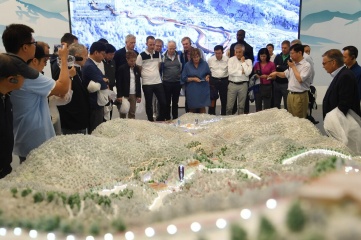 With the first Olympic test event and a major social media partnership, the International Ski Federation (FIS) is at the heart of China’s rapid development winter sports sector

“The drive and commitment in China is unparalleled, not just to organise outstanding Games, but to develop winter sports as a mainstream sporting activity, recreation and industry,” she told Host City.

China’s winter sports push has led to a major expansion of sports facilities, with 742 ski resorts and 596 ice rinks by the end of 2018, according to an IOC statement. The Beijing 2022 Organising Committee has cited a 16 per cent year-on-year growth of the winter sports industry in China to USD 53.6 billion in 2018, creating 1.5 million jobs to date.

The number of events being hosted is growing accordingly, with 8.15 million people taking part in 4,401 district level, municipal and national level winter sports events in Beijing alone during the 2018-2019 season.

“Beijing 2022 is delivering on its vision to engage 300 million people in winter sports, and we can see real benefits resulting from the various actions that are being undertaken across the country,” IOC Coordination Commission Chair Juan Antonio Samaranch said. “We have heard about some impressive developments that exemplify the vision for winter sports in China in terms of mass participation, elite sport and tourism. This progress is very encouraging for the long-term future of winter sport, both in China and internationally.”

The first test event for the Beijing 2022 Winter Olympic Games will be the FIS Alpine Skiing World Cup (Downhill & Super G), taking place on 15 and 16 February 2020, as part of a programme of 19 Olympic test events and 5 Paralympic test events. A local organising committee called “Experience Beijing” has been formed for the test events, with venue teams already moving to the Yanqing region and working closely with the FIS to host a successful competition.

Zhang Jiandong, Vice-Mayor of Beijing and Executive Vice-President of Beijing 2022, said that, with the first test event scheduled for February 2020, Games preparations had entered a new phase, with the focus shifting to operational readiness, and that the Organising Committee would step up work in all areas. “We will work closely with the relevant government offices to promote winter sports and attract more people, especially young people, to take part,” he added.

The IOC Coordination Commission visit to Beijing was immediately preceded by the signing of a strategic cooperation between FIS and Sina Sports for the promotion of snow sports in China.

The partners will also cooperate on the Sina Alpine Ski Cup mass participation skiing competition series in China, which will be officially endorsed by FIS. A “FIS Destination” will also be installed on Sina’s Weibo media platform, one of the biggest social media platforms in China, featuring coverage of FIS events and promoting FIS activities in China such as Get Into Snow Sports.

The Sina Alpine Ski Cup, created and initiated two years ago by Sina Sports, has quickly become the largest mass participation ski event in China. It will be the first such Alpine Skiing series to receive official FIS endorsement and will its organisation will be supported by the Chinese Ski Association. FIS anticipates the event will quadruple in size for the upcoming season.

The Get Into Snow Sports (GISS)-China grass roots beginner courses are being executed through FIS’s educational entity, FIS Academy, and in partnership with the Chinese Ski Association to complement their recreational and ski instructor programmes.

The FIS media channels on Weibo will feature various coverage of FIS events, promoted by Sina Sports alongside the Sina Alpine Ski Cup.

The reach and track record of Sina Sports is evidenced by sports events that they have already developed with 3x3 basketball and futsal.

“Sina Sports is delighted to be entering into this cooperation with FIS and receiving the first-ever mass participation skiing event endorsement from FIS. We are proud to support FIS initiatives in China, including official competition events as well as the Get Into Snow Sports (GISS)-China program, in order to jointly promote winter sports in anticipation of the Beijing 2022 Winter Olympics”, said Sam Li, Head of International Business Strategy for Sina Sports.

Sarah Lewis OBE is speaking at Host City 2019, the largest meeting of cities and sports, business and cultural events, on 26-27 November in Glasgow