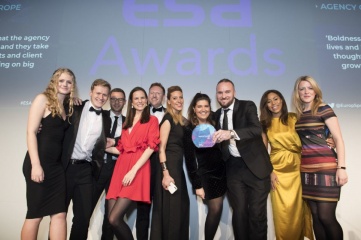 More than 400 sponsorship and sports marketing leaders came together to celebrate ESA’s mission to unite, inspire and grow the sponsorship industry, at The Brewery in central London. With prizes across 30 categories, the 2020 ESA Awards ceremony was the largest in the history of the ESA Awards.

Demonstrating the diversity of the ESA Awards, the big winner on the night was a cultural sponsorship – the An Post Irish Book Awards was recognised by a panel of international experts as the prestigious ESA Sponsorship of the Year, while also winning ‘Best Newcomer (UK&I)’ and ‘Arts and Culture Sponsorship’.

Paddy Power’s much-lauded ‘Save Our Shirt’ campaign, delivered Octagon, also emerged from the night with a trio of trophies, securing ‘Best Use of PR’, ‘Game Changer – Sport’ and ‘Sport Sponsorship €400k – €1M’.

The invitation-only ESA Best of Europe competition, sponsored by Sponsorium, was won by Denmark’s ‘The Sydbank Cup: The 99% Broadcast’ campaign, with Ireland (‘Aldi Play Rugby’) taking silver and Slovenia (‘Petrol’s Winning Service’) rounding out the podium with bronze.

Other campaigns to leave with multiple trophies included Marriott Bonvoy’s partnership with Manchester United, which won two awards (‘Best Newcomer [Global]’ and ‘Sport Sponsorship €1-5M’), while Arsenal, Cadbury and Vodafone took home a win and a highly-commended each.

Winners were chosen by a rigorous, two-step judging process overseen by a 40-person judging panel of sport, media, arts, culture and entertainment leaders from ten nations. Head here for a video explaining more about how the ESA Awards are judged.

“With so many incredible entries, the 2020 ESA Awards has been our most hotly-contested to-date, with inspiring work on display from all our winning campaigns.

Last night’s ceremony proves that there has never been a more exciting time for sponsorship. Our winners represent the best of sponsorship, coming from all corners of Europe and all parts of the industry. A massive congratulations to all our winners!”

“The 2020 ESA Awards saw a record-breaking number of entries, and, as always, the decisions were passionately and diligently debated. On behalf of ESA I’d like to congratulate all the worthy winners, including the An Post Irish Book Awards for taking home ESA Sponsorship of the Year.

I’d also like to thank all our ESA Awards sponsors and partners, with special thanks to our main event sponsor, POWA Index, and our judging panel – an amazing group of industry professionals. The ESA Awards continues to provide the best showcase of creativity in sponsorship across Europe and I’m thrilled to be able to celebrate another fantastic year for the Association and to enjoy another great party!

Naturally, without the support of our members, the ESA Awards wouldn’t be the event it has become. I’d like to thank them all for their continued support. ESA has a crucial role to play to inspire, unite and grow the sponsorship industry and our members are at the heart of our mission.”