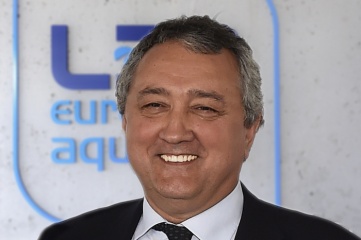 Paolo Barelli, LEN President and co-chair of the 2018 European Championships Board looks ahead to the defining moment for this new multisport event

“It was fantastic to see Kiev host an elite European Championships in Aquatics for the first time. The event was a great success, with sold-out sessions and a great atmosphere.

“Indeed, one of the key objectives for LEN is to develop our disciplines such as swimming, synchronised swimming, open water swimming and diving by reaching out to as wide an audience as possible. Thus it was great to learn that there is such an appetite to watch these disciplines when they take place at the Tollcross International Swimming Centre, Scotstoun Sports Campus, Loch Lomond and Royal Commonwealth Pool.

“Of course, each stakeholder has some of their own individual objectives, but there is an overriding common vision that we all share: the European Championships as a new generation multisport event for European sports that will be an 11-day celebration staged every four years with a super-charging effect on our participating sports and our athletes.

“Together we are creating a must-watch and must-attend experience that elevates the Champions of Europe. We aspire to unite our sports, the public, athletes, nations; to be diverse in showcasing our sports and demonstrate that being a European Champion is a fantastic achievement; to inspire the next generation of champions and encourage the public to get involved in sport; and to continue the rich tradition of our sports so they have a long-lasting, positive impact on the sporting world-stage.

“In short, it is the ultimate multi-sport event to promote our sports on the continent.

“During our recent aquatics events, I have been speaking with our Member Federations about what a special event the European Championships will be for the athletes, and I have been reassured by the positive response of the aquatics family.

“It is our job to work with the athletes who will be competing in Glasgow to ensure they are aware of the enormity of the event. Now that the Championships are starting to be recognised, I am sure many of our European participants in Budapest will be endorsing the European Championships and giving it their full support.

“Indeed, there are so many special qualities connected to the European Championships. We must remind our sports men and women (important to say we have an almost equal gender split!) that between the participating sports – aquatics, athletics, cycling, golf, gymnastics, rowing and triathlon – there are 450 years of history surrounding our respective European Championships. We need to remind them also that to be the best at something out of a continental population of 750 million people is a pretty special achievement!

“Their achievements will be celebrated not only by the fans attending the events in Glasgow and Berlin but also by those watching on television. Our seven major sports have joined forces based on their existing power to attract broadcast viewers which will be further enhanced by packaging them together.

“One of the most important benefits for our sports is that we will benefit from an enhanced offer from our Broadcast Partner, the European Broadcasting Union – up to 1.3 billion television viewers, with many more viewers across multiple digital platforms.

“With one year to go approaching, we are all working hard to promote the inaugural event in Glasgow and Berlin – two of the most iconic sporting and cultural cities in Europe. The European Federations, the Host Cities, and the EBU are fully focused on achieving collective success, pushing the ground-breaking concept and educating everyone within our own communities and beyond.

“We aim to create an awareness and engagement amongst sports and main eventers across Europe – and we see the enormous power of social media as presenting the biggest opportunity to engage these audiences. We want everyone to share in 'The Moment' – our tagline that celebrates an event that will be the defining moment for European Champions for 2018 and beyond."