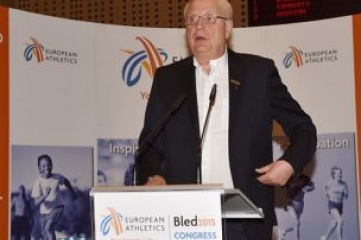 Amid the doping storm, the president of European Athletics has called for a “cultural revolution” including a review of historical world records and firm support for Russia’s reintroduction to the sport

European Athletics President Svein Arne Hansen has announced a number of measures to bring about a “cultural revolution” in athletics.

These initiatives include a review of European records, in line with the UK Athletics proposal that world records should be reset in light of ongoing doping revelations.

“Rebuilding the reputation of athletics is likely to be the biggest job we have ever undertaken,” Hansen wrote in a statement issued to stakeholders.

“Symbolic gestures and cosmetic measures will not be sufficient, this grave and unprecedented situation calls for fundamental reform.”

“We believe a cultural revolution will be required for athletics to rebuild its reputation and bring the sport’s governance to where it needs to be.”

The reform programme includes further development of good governance structures; investing in a new mandatory anti-doping education programme, pushing IAAF and WADA to implement tougher penalties for doping offenses, developing a national anti-doping system of assessment and monitoring, and reviewing the European records, in line with the British Athletics proposal for world records.

“The recent scandals have reopened the discussion about the legitimacy of certain records in our sport. These link us to a past in which neither we nor the public can have full confidence,” said Hansen.

“Over the years different approaches for addressing this question have been proposed but the issue is very complex and so far nothing has happened. It is clear that now the situation is different.

“We will set up a special project team in the coming months to look again at what is best for the sport and possibly a new approach to records in Europe that could be an example for the IAAF and our Member Federations.

“We will also review the lists of all past award winners, like our European Athlete of the Year or our Coaching Awards, to see if action needs to be taken. Whatever changes we make will be clearly explained so that the public can see how European Athletics is coming to terms with the realities of our sport’s past.”

An independent WADA-commissioned report, published during HOST CITY 2015 on 9 November, revealed that officials at a WADA-accredited drug testing laboratory in Moscow destroyed samples and accepted bribes to cover up positive tests.

“Like everyone in athletics, I am gravely concerned and saddened by the recent WADA report on systemic doping in Russia, the serious corruption allegations against some former IAAF officials and the other scandals that seem to surface on a daily basis,” said Hansen.

“Although European Athletics has not been implicated in any way and these issues are not unique to athletics, the public image and reputation of our sport have been tarnished and this, of course, touches all of us.”

Hansen said European Athletics would take work with IAAF to “help Russia come back into the sport on the right terms.”

“Our philosophy will be one of “tough love” – firm, fair and respectful – but our tolerance for doping and any form of corruption must remain at zero.

“We will also support our Member Federations that have ideas to contribute to the discussion about our sport’s future now taking place, for example the ‘Manifesto for Clean Athletics’ published by UK Athletics.”

WADA is due to release another report later this week.

“When the second WADA report is released, we will carefully study it and any recommendations it contains. If immediate comments are called for, we will make them. Then, in light of the report, we will take our time to review the projects and proposals we have put forward and make any adjustments or additions required,” said Hansen.

Hansen endorsed the current leadership of the IAAF. “We have full confidence that IAAF President Sebastian Coe is the right man for the current challenges, and European Athletics will give him the backing and support he needs.”