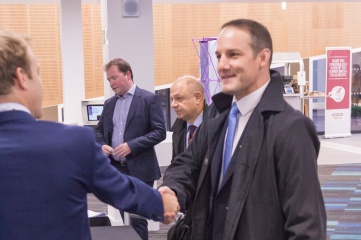 The Commonwealth Games Federation’s Chief Executive Officer, and former Chief Executive of Glasgow 2014 Ltd., David Grevemberg, has been appointed by Her Majesty The Queen as an honorary Commander of the Most Excellent Order of the British Empire (CBE).

The announcement was made by the Commonwealth Games Federation on Monday morning, just before Grevemberg spoke on the opening panel discussion of Host City 2015 conference in Glasgow.

The honour is conferred in recognition of services to the Glasgow 2014 Commonwealth Games.

“Whilst it is incredibly humbling to be recognised for my contribution, the successes and impacts of the Games were only made possible by the hard work and support of our partners, participants, staff and citizens.

“I would like to thank Her Majesty for this honour, and look forward to an inspiring, impactful future for the Commonwealth Games Movement, a powerful symbol of the flourishing, modern Commonwealth and its citizens”.

David Grevemberg CBE spoke on the opening panel discussion of Host City 2015 conference on the subject of “How Events and Cities Innovate to Thrive”.

“This special honour is testimony to the success and continued legacy of the Best Games Ever, as Glasgow and its people delivered one of the standout performances in Commonwealth sporting history,” she said in the CGF statement.

“I congratulate David on this honour, as we reflect on many happy memories of the Games and move forward with our ambitious plans to deliver Transformation 2022 with our members and stakeholders”.

Born in 1972 in Louisiana, USA, David was a former wrestler, coach and administrator, before taking up post in 1999 as Executive Director of Sport and International Federation Relations at the International Paralympic Committee (IPC), headquartered in Bonn, Germany.

The honour is a recognition of the transformational power of Commonwealth sport and its recent positive impact on Glasgow.

Speaking about last year’s HOST CITY conference, Grevemberg said: “I found it enlightening. The calibre of people that attended and spoke was excellent; it was excellent to meet so many experts with a shared perspective and passion and belief that the hosting of major events is a force for good.”