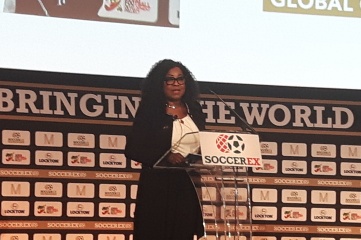 In her first major speech as FIFA Secretary General, Fatma Samoura set out her vision for the organisation as it fights off criticism for closing an anti-racism task force

FIFA Secretary General Fatma Samoura on Monday acknowledged that FIFA is a damaged brand that it has not focused enough on grass roots or women’s football, but insisted that the new leadership will be stronger on discrimination, despite the closure of the anti-racism task force.

Samoura joined FIFA from the United Nations in June. “There were many surprises, good and bad,” she said at Soccerex Global Convention, citing FIFA’s “incredibly committed and highly educated staff” as a positive revelation.

“On the bad side, there were some habits that needed changing. There are some cultural behaviours that we have already started acting on, for example: not really focussing on the development of football at the grass roots level; putting women’s football at the centre of our core business.

“Through the FIFA Forward programme we are really trying to prioritise those two things.”

She began her first major public speech as FIFA Secretary General by admitting she was “new to the administration side of football,” and that attending such events will be important for her in “establishing relationships”.

“I bring another perspective derived from 25 years in the UN system, mostly in crisis and complex emergency situations,” she said.

“In the midst of turmoil, gunfire and confrontation, the only time people would stop warfare was when it was raining or when there was a football game – including during Ramadan and Christmas.

But despite this power, football is still not universally accessible, she said.

“This has given me a desire for an even bigger women’s game and for women to play a greater role in administration. Men and women, young and old, well off and not so well off, have a role in the game.”

FIFA has been widely criticised for closing down its anti-racism task force, with Prince Ali Bin Al Hussein, President of the Jordanian Football Association calling the move "incredibly worrying".

Pressure group Kick it Out said in a statement “This comes at a time when there is clear evidence that discrimination, prejudice and hate are on the rise in developed societies, particularly in Europe but also in different forms across the world.”

Samoura’s speech at Soccerex Global Convention in Manchester followed a welcome address from Andrew Burnham, the frontrunner to become the first Mayor of Greater Manchester, in which he challenged her justify the closure of the anti-racism task force.

“It had a very specific mandate, which it has fully fulfilled” Samoura responded. “Its recommendations have now turned into a programme and a strong one.”

Asked by host David Davies if the problem is one of perception, she replied “We can live with perception, but what I can tell you that we are taking very seriously our role as the governing body to fight discrimination.

“As an example, we have a monitoring tool and we act when this comes to bullying and facing strange and extreme behaviours in the stadiums.

“We have several cases of disciplinary measures against several clubs and teams which have been accused, and based on solid legal grounding we have taken them through this disciplinary committee, which has taken very strong sanction against them.”

Despite the closure of the task force, she said “the new leadership will be stronger, not only on racism but any kind of discrimination – including any violation of human rights.

“We need to be firm. The zero tolerance policy is at the top of the new FIFA administration’s agenda.”

Assuring stakeholders of the integrity of the organisation will be crucial to its continued success under the leadership of new president Gianni Infantino.

“It’s clear to me that fans and our member associations have all great expectations for FIFA,” said Samoura. “They are counting on Infantino to fundamentally change the way we do business.”

She cited the creation a Chief Compliance Officer position within FIFA, as “an example that is now being replicated by all the confederations.”

The development of the game at grass roots level will be driven by the new FIFA Forward programme, which consists of investments via member associations.

“The goal of FIFA Forward is to have a high impact programme with broader participation, better teams and leagues and a more attractive sport.

“In the end, this is all about making the difference and reducing the gap between dreaming about the World Cup and participating in the World Cup.”

“We really want to put in place a monitoring and controlling tool, because the Forward programme is about a lot of money to national associations. It’s about US$5m – for clubs in England that’s nothing, but where I come from that’s a lot of money and we need to ensure that those resources are really well channelled,” the Senegalese diplomat said.

“I had a very comfortable position at the UN. I was convinced by Infantino that it is time for change. Yes, our brand has suffered a lot of reputational damage.

“My appearance here today is testimony to how we would like to restore trust and confidence. We have already started really working with commercial affiliates who still believe in the brand of FIFA, giving certainty that we are the partner of choice.

She insisted that the worst is over for FIFA, despite ongoing criminal investigations into several senior figures that led the organisation.

“We are putting the past behind us.” she said. “Let’s get the investigation done while not repeating the mistakes of the past.”

“We want to have the best administration by recruiting the best people we can find. In terms of governance and accountability, we have to reach the highest standard.

“I am ready to take these challenges. I count on everyone’s support to make the FIFA mission a successful one.”