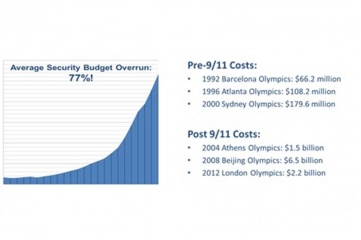 Malcolm Tarbitt, Executive Director of Safety and Security at the International Centre for Sport Security (ICSS) and speaker at Host City 2015, explores the role of security in the cost cutting debate

Over the last few years, the increase in costs to host major sport events has been astonishing. As a result, in the midst of a global economic downturn, many countries have shied away from bidding and hosting major sport events due to the huge investment and infrastructure needed to host a safe and successful event.

As the last 12 months have shown, the sports industry is facing a period where it isn’t just the bidding cities that need to do the convincing, but also the rights holders of those major events too. Major sports events are fast becoming a luxury that few can afford.

Take the Olympic Games as an example, the International Olympic Committee (IOC) has already taken a lead to try and reduce the cost of bidding for and hosting the Games through its Agenda 2020 programme, with many other major continental and multi-sport events beginning to follow suit and thinking harder about how to reduce costs in order to attract bidding cities.

What is apparent is that – in the face of constantly evolving threats and risks and growing security costs - many aspiring host cities and countries now simply cannot afford to host major sport events, particularly in the face of many social, economic and political challenges that face countries around the world today.

Budgets have overrun on numerous occasions for major international sporting events with many of these costs being borne, more often than not, by the host city and the public purse.

But what part does security play in the cost cutting debate and what can be done to reduce the costs when planning for security?

Many agree that security has a vital role to play in the success of any major sport event or venue, as well as the overall spectator experience, however over the last decade major event security costs have spiralled in the face of huge international uncertainty and other emerging security threats. This year alone, over R$400 million (approx. US$100 million) will be spent on public security by Rio de Janeiro in the lead up to next year’s Olympic and Paralympic Games. All of this, in the face of a huge economic downturn taking place in the country.

As part of our work at the ICSS, our team of international experts have dedicated themselves to help develop a more cost effective approach to major event safety and security, as well as encouraging a more coordinated, international and long-term effort to enhance understanding about safety and security issues threatening sport.
It is clear that the industry - both sport as a whole and the security sector - is at a turning point in the evolution of major sport events and that public and private bodies must be more creative in the way it cuts costs, without cutting corners.

One approach the ICSS firmly believes in to help host cities in this area is to integrate security planning from the start to ensure that all aspects of security are covered – and in a timely manner.

Based on years of international experience and research, the ICSS has developed cutting edge models to help secure host cities and countries achieve this and will hopefully serve as a master guide to major event security planning.
It is also critical to perform a thorough threat and risk assessment at an earlier stage of the event life cycle. Resulting from this, security planning and budgeting can be prepared and then  integrated into sport facility security design from the very beginning.

As we have seen in the past, last-minute surprises and reactive approaches to a security issue have been costly for many host cities, with significant amounts on public money being spent on hiring private security firms or other public sector resources (e.g. police forces, military) being called upon at the last minute in order to fill a security gap. An example of this was London 2012, which exceeded its original security budget by roughly 105%!

By integrating security right from the beginning of the design phase for venues, organisers can make significant savings by identifying potential threats to the event and venues at an early stage in the process and thus preventing rework, delays, penalties and incorrect use of materials later on.

It is also worth remembering that security at a major event is not just about the venue. It is also about creating a safe and secure environment in other public areas like fan zones and public viewing areas to ensure spectators have peace of mind and can fully experience a city or country by using local infrastructure to create that ‘special’ atmosphere that many organisers are looking for.

Since athletes, fans and VIP’s have to move between locations, it is also crucial that route and transport security is also fully integrated into the overall design and operations of an event. This requires a significant level of security planning and communication, particularly with the material screening facilities required to screen all goods that enter a venue.

Through our work here at the ICSS, we have noticed that not enough events at the moment think about how security design of their sport venues impacts on the wider security planning and user experience. By bringing on board the security consultant from the early stages, potential operational problems can be identified from the outset and avoid costly changes to the venue or awkward workarounds once the venue has been built.

Looking ahead, as major events and the industry continues to look at new ways to reduce costs, it is important that security plays its role too. At the ICSS, through our ongoing work helping to secure venues and major events, our experts are contributing and continuing to look for new, cost-effective ways to protect those who attend major events.

Nevertheless, it is important though that sport does not lose sight of the many new threats in the world today and that we do all we can to ensure the highest levels of safety and security for fans, athletes and the many others that love and attend sport events.

This can only be achieved by major events bringing on board the security consultant at an earlier stage and recognising the numerous benefits that  a thorough threat and risk assessment and an integrated approach to security can have on an event – both operationally and on the bottom line.