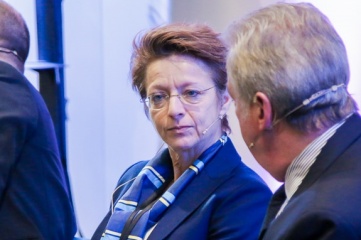 Sarah Lewis OBE, Secretary General of the International Ski Federation (FIS) and the Association of Winter Olympic International Federations (AIOWF), looks forward to Host City 2019 in Glasgow in November and shares insights from SportAccord in Gold Coast earlier in the year

Host City: Host City 2019 takes place in Glasgow on 26-27 November, with theme of “Innovate; Reformulate; Co-Create”, in recognition of the fact that many major events are evolving and emerging through creative partnerships. To what extent are FIS and other Winter IFs innovating, reformulating and co-creating events?

Sarah Lewis: Collaborating with other stakeholders for the FIS major events, namely the World Championships, is fundamental to utilise the respective capacities to deliver the best possible event. We aim to continually evolve and be innovative, whereby it fundamental to respect the sport and ensure its DNA remains intact.

Partnership is normal practice for major FIS events, both within the FIS disciplines as well as with other stakeholders. For example, the three Nordic disciplines of Cross-Country Skiing, Ski Jumping and Nordic Combined are staged as one Nordic Event that provides permanent action. Since the Vancouver 2010 Olympic Winter Games, Freestyle Ski and Snowboard are combined at major events and increasingly as part of the FIS World Cup series, in order to maximise the many synergies with the venues and operations.

I’m looking forward to interesting exchanges and discussions at Host City on innovating, reformulating and co-creating events where many different event stakeholders can contribute their own and shared perspectives.

Host City: The theme of SportAccord 2019 was “The Future of Big Data and Analytics”. What opportunities do you see from big data and analytics in skiing and other winter sports events?

Sarah Lewis: The main and important opportunity is to establish a direct online relationship and interaction with the 15 million online followers of the FIS disciplines, which is a key asset for the development of digital activities as well as sponsorship opportunities. Our objective at FIS is to create a digital ecosystem to serve viewers and fans, which will open up new commercial opportunities for the stakeholders.

Host City: What were your impressions of Gold Coast and Queensland as a host destination, as they consider applying to host the 2032 Summer Olympic Games?

Sarah Lewis: Just as well you specified Summer Games, as the likelihood for the Winter edition would be tricky even with a very “New Norm” concept! The Commonwealth Games in 2018 have provided an excellent basis for future Olympic Games and during SportAccord there was certainly great enthusiasm expressed from the sports leadership, political authorities and tourism.

Host City: The growth of the sports industry in China is reflected by the growing number of conventions taking place there – with World Winter Sports Expo, Host City Asia and now SportAccord taking place in Beijing. What impact do you think the upcoming 2022 Winter Olympic Games is having on the growth of winter sports in China?

Sarah Lewis: The catalyst of Beijing 2022 is already having a momentous effect on the growth of winter sports and even globally for the industry and tourism. China has a long cold winter and significant mountain regions and the country is now exploiting the potential of winter sports tourism and recreation for the benefit of the health of population, especially children, to combat the concerns about an increasingly sedentary lifestyle.

The legacy of the Beijing 2022 Olympic Winter Games was established by the Government already at the outset with its candidacy to use the Games as a spur to develop winter sports for the general population and the economy, through developing tourism and winter sports industry.