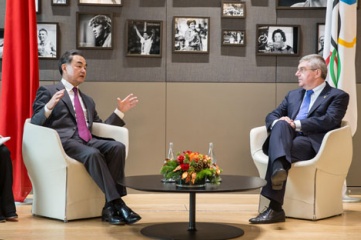 Wang Yi, foreign minister of China met with IOC president Thomas Bach and leaders of other international organisations in Switzerland to strengthen cooperation

The Foreign Minister of China, Wang Yi, met with International Olympic Committee (IOC) president Thomas Bach in Lausanne on December 11 to discuss how China can strengthen its cooperation with the global sports organisation.

On his visit to Switzerland Wang also met with the director-generals of the United Nations (UN) and the World Health Organisation (WHO), as well as the president of Switzerland.

According to China Daily, Wang told Bach, “China is willing to strengthen cooperation with the IOC while upholding the Olympic spirit.”

"With the all-out efforts of the Chinese people and the substantial help of the IOC, I am confident that the 2022 Winter Olympics will be another huge success," he said.

According to Yutang Sports Marketing, Wang stressed the importance of sports in human and national development, recognising the great contributions the IOC has made to promoting global sports development and strengthening the friendship among people from different countries.

Bach reportedly said China’s plans for sports development are at one with the IOC’s, noting the tremendous contributions China has made to the IOC and expressing gratitude to China for its cooperation with the IOC.

The IOC also looks set to strengthen this cooperation beyond the hosting of the Winter Games. "The IOC will be a full helping hand in delivering a fruitful 2022 Winter Olympics, while expecting to team up on further cooperation with China," Bach said.

In the meeting with UN Director General Michael Moller, Wang said "Against the backdrop that the global situation is continuously becoming more complicated, the role of the United Nations can only be strengthened instead of weakened."

Margaret Chan, director-general of the World Health Organization, told Wang "China has set an excellent example in poverty alleviation and health undertakings, and I believe it will contribute more to improving global public health and sustainable development."