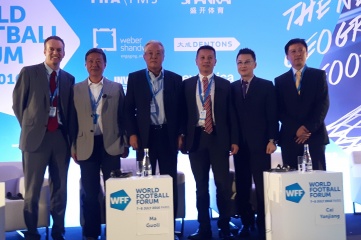 EXCLUSIVE: Host City speaks with leaders of digital media and traditional broadcasting to find out what the future holds for the sports industry in China

The worldwide rise of digital media is concurrent with the growth of the middle class – and nowhere is this more evident than in China. Millennials are consuming content primarily through digital media, and their appetite for sport is immense. China's investments in sports and entertainment will be a key theme of Host City 2016, the largest meeting of cities and cross-sector events, which takes place in Glasgow on 21 and 22 November.
The distribution of sports content in China is being driven largely by internet companies. The long and growing list of online companies in China involved in the sports market includes Wanda Group, Tencent, Sina Sports, and PPTV. Two of the most recent and nimblest arrivals on the scene are Alisports and LeSports, the leaders of which shared their ideas with Host City at World Football Forum.

Alisports’ disruptive innovation
Alibaba Group amassed a US$200bn fortune primarily by connecting global buyers with the Chinese supply chain. But the company realised there was a large missing piece from its giant online jigsaw.
Wang Dong, Vice President of Alisports says, “In order to complete its ecosystem, sports is one of the elements initially they missed and they want to put this last puzzle piece right there to complete this whole situation.”
In December 2015, Alibaba’s newly formed “E-Auto” connected car brand signed an eight-year Presenting Partnership with the FIFA Club World Cup.
“This nine month old company signed a deal with the FIFA Club World Cup as really part of the way to make its presence felt,” Wang Dong tells Host City.
“By aggressively being involved in the world sports arena, the presence of China will be strongly felt.”
In April 2016, Alibaba Group launched its dedicated sports brand, Alisports, to tap into the growing market opportunity.
“I think the overall environment of the sports industry is getting stronger and stronger. And overall we see that, given the boost of economy of China and around the world, the sports industry is certainly a way to reach out more,” says Wang Dong.
Private sector investment in China is running in tandem with a massive government drive to boost sports. “I think that given that we have a very football-loving President Mr Xi, showing leadership there, all the elements are on the table – and this is a way to really find out more business opportunities.”
Alisports will use its online platform and connections not only to broadcast existing events but also to launch new innovative formats.
“We are acting as a service provider, with the eplatform for everybody to launch their business on. And also we do our own sports activities as well by operating events, by running events and by actually being closely in touch with associations around the world to, if you will, be a little bit disruptive, to create some new events, formats and leagues and regulations, to attract the younger crowd.
“It could be three-a-side or five-a-side street football or basketball – a bit different to the traditional leagues that include more people.”

LeSports – accessing users through sports
LeSports is the sports brand of China’s largest online video company LeEco, broadcasting online for mobile, for OTT (over-the-top) TV and laptop.
“LeSports is maybe the most ambitious sports company in China,” Ma Guoli, Deputy Chairman of LeSports tells Host City. “We are concentrating not only on the media but also events and products – everything related to sports.”
LeSports won the broadcasting rights in China for three matches of the International Champions Cup, including a match between Manchester United and Manchester City in the National “Bird’s Nest” Stadium on 25 July.
LeSports owns the online broadcasting rights in China to the qualifying rounds of 2018 World Cup. The company is also investing in businesses outside the People’s Republic of China, having bought the media rights in Hong Kong for the Premier League and the World Cup in 2018.
“We have our own platform in Hong Kong – so we telecast it ourselves and also sublicense some rights to local TV platforms. And we have subsidiaries in the US but we are just getting started there.”
More than 40 sports disciplines are broadcast on LeSports. “We’ve got a joint venture with Lagardere Sports Asia; for the future we would like to do more partnerships.
“In terms of investment, at the stage mostly we prefer to buy. To get a joint venture with an existing sport organisation is not easy. Because if you are the organiser you like to sell the rights – it’s better than to joint venture.”
Competition between digital platforms in China is strong, he says. “For the new media platform, a view means a user and a user means a potential consumer. The key point for the digital platform is to get more and more users. And they need media rights to get more users.”

Why digital is booming in China
Ma Guoli says China presents immediate opportunities for internet broadcasting that do not exist in the western world. “In Europe and the US, I believe traditional TV has no competition from online in the next ten years, mainly because they own many rights until 2030.
Digital media companies are growing much more quickly in China, Ma Guoli says, because there is no competition for TV from commercial broadcasters.
“In China we lost the opportunity to develop the pay TV business. It is such an important source of revenue for sports organisations.
“Because in China there is only one TV network for sports, people need more – then online companies have a chance. If people want to watch golf but they can’t get it on traditional TV, now the online companies own rights.
“The technology is developing so quickly today, so new media platforms can provide more content to the people, who can then choose a platform to select an event that would like to watch. It’s a combination of traditional TV and new media platform – that’s the role that digital platforms play in China.
“And the technology is so good now; with the OTT TV set, the quality of the picture is better than cable TV.”
According to Cai Yanjiang, Director ABU Sports, Asia-Pacific Broadcasting Union, the rise of new media is an incentive for broadcasters to develop their own digital media broadcasting.
“CCTV started their new media before 2000, but unfortunately CNTV – the digital media platform for sports broadcasting – didn’t work very well. CCTV can develop to make better digital broadcasting of sports events on their own platforms,” he tells Host City.
The national broadcaster is aware of the changing consumer demands. Zhang Xing, Deputy Controller of CCTV Sports says, “We are seeing that the older generation of viewers still uses television sets, but younger views use their phones. We need to guarantee that we still broadcast events on TV but we need to give more importance to social media.”

Disruption across Asia
Of course, the phenomenon of digital media transformation is not restricted to China. “Disruption is happening everywhere,” says Cai Yanjiang.
“For me it is good when western companies rush into the Asia Pacific region with new technology and help broadcasters in a new way through the internet and internet plus – that is something that the Chinese broadcasters are adopting.
“And more and more internet companies are taking over the dominant role. In the past it was CCTV dominating, but it’s actually changing now in China. That will also happen in surrounding countries, in south Asia, it has already happened in Japan and Korea, where traditional TV is facing a great challenge from internet companies.
“So from my perspective, serving for the Asian broadcasting union, we’ve got a lot of underdeveloped nations and they don’t have enough facilities or logistic support and telecom standard won’t support them to do internet broadcasting at the moment.
“But they are building up, so I would advise our members, the broadcasters in Asia Pacific region, to go forward, to take up the new way of internet broadcasting, because we all know that digital is the trend in the broadcasting world – not only in football but in everything.
“That is good; that will set a model for our members in underdeveloped countries and state broadcasters to follow. That’s undergoing now in countries like Malaysia, Singapore and Thailand – everywhere they are developing new digital broadcasting solutions.”
However, Asian broadcasters need investment to undergo digital transformation. “What they don’t possess is funds, because in the past traditional television got government funding. Now they need to find a new way to develop their own digital broadcasting. At the same time, telecom companies and digital media companies – especially international ones – are trying to enter the market.
“There is huge potential for example in Myanmar, in the Philippines – everything is changing fast. So although at the moment it’s not really developed, but we can see in the future they have potential.
“In some countries traditional television and new media work together very well; in other countries they are trying to kill each other.”
According to Dong Wang of Alisports, digital media companies have the potential to overtake domestic broadcasters within five years.
“The faster the domestic broadcasters realise how important digital media and platforms are to them and their government and local companies, if they invest in digital media then they can win over in the future because they have government support.
“But if they are not doing anything on this, when the foreign investors, telecom companies or digital broadcasters enter the market, there will be no room for domestic broadcasters any more.
“It can be a great leap to transform from the traditional broadcasting way to the digital way. It will just take five years or so and the whole thing will be changed – so it’s like a race.”
The question is – who’s going to win? “It’s really hard to say. It depends on the vision and understanding of governments,” he says.
“Governments must support their own domestic broadcasters by setting up some regulations – even state laws to protect broadcasting. It’s quite important for the improvement of local companies. Otherwise they will be taken over by all those internationals.”