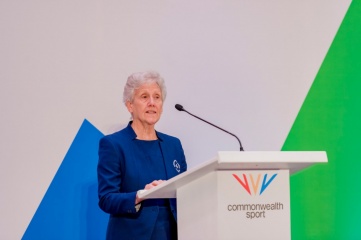 Dame Louise Martin DBE is speaking at Host City 2019, the largest meeting of cities and sports, business and cultural events

Transformation 2022 is the Commonwealth Sport Movement's Strategic Plan from 2015-2022. Refresh refers to the current period from 2019-2022 following the first four-year phase.

The plan follows detailed member consultation as part of the CGF’s Regional Meeting Programme which commenced following the conclusion of the Gold Coast 2018 Commonwealth Games.

It also establishes a new strategic priority focusing on the Movement’s ambition to ‘Realise Collective Impact’ - focused on athletes and sport for social change – a defining differentiator for the Commonwealth Sport Movement.

This aims to empower and equip athletes as agents of change and advocates for integrity; provide support and opportunities for CGAs; contribute to truth, reconciliation and relief programmes and strengthen the contribution of sport in Commonwealth Cities.

The “Commonwealth Sport” brand was developed in close consultation with the 71 Commonwealth Games Associations (CGAs).

It reflects a bold, forward looking approach that underpins the CGF’s values of Humanity, Equality and Destiny, the collective work of the six regions and the vision of the Movement.

It is a brand for the entire movement, created by RBL agency in the UK, and replaces the more internally-focused corporate identity, launched back in 2000.

CGF CEO David Grevemberg CBE said: “There really is no better place than Rwanda to strengthen and position Commonwealth Sport as a progressive leader in sport and social change, harnessing the power of sport as a catalyst to unleash our human potential and positively transform lives.

“The Transformation 2022 Refresh will ensure the Commonwealth Sports Movement is in the best possible position to capitalise on the opportunities and mitigate possible risks that lie ahead in a rapidly changing world.

“It is an important time to galvanise and drive the positive impact of sport on society which is why we have updated and launched an exciting new Commonwealth Sport Brand to keep pace with our ambition.

“This means we aren't just unveiling a new logo and emblem but actually linking our narrative, positioning and meaning. It is about putting the emphasis back on our vision, our values and our athletes.”

Dame Louise Martin DBE was re-elected by delegates at the General Assembly four years after she took up the role in 2015, when she became the first female to hold this office.

She said: “Looking back over the last quadrennial, I am overwhelmed by a sense of pride from our collective achievements, at the endeavours of Commonwealth athletes, at the success of our flagship events and how we have adapted and responded to challenges as well as harnessed opportunities.

“Like all families, we are defined by people, how we treat and respect each other and how we work together.

“Let’s continue to deliver on the strategy outlined in the Transformation 2022 Refresh and enjoy this journey as through sport, we build peaceful, sustainable and prosperous communities across the Commonwealth.”

The General Assembly took place at the flagship Kigali Convention Centre with the event marking the ten-year anniversary of Rwanda joining the list of Commonwealth nations in 2009.

It was staged a year before the country hosts the Commonwealth Heads of Government Meeting (CHOGM) in 2020 with Commonwealth Secretary General the Rt Hon Patricia Scotland QC in attendance where she delivered a formal address to the Assembly.

Dame Louise Martin DBE is speaking at Host City 2019, the largest meeting of cities and sports, business and cultural events