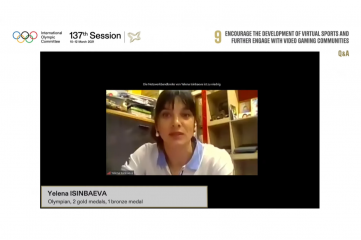 As the Olympic Movement branches out into virtual sport, a billion-dollar question is raised: could, should and would the likes of Counter Strike ever join the party?

The International Olympic Committee’s latest strategic reform programme, Agenda 2020+5, recommends that virtual versions of Olympic sports should be considered for inclusion in the Games, only if they require a comparable level of physical activity.

But at the 137th IOC Session, one IOC Member called for the Olympic umbrella to be extended much wider, to encompass the full scale of the opportunity of gaming.

Following addresses from IOC Members Christophe Rolland and Gianni Infantino, on the recommendation to encourage the development of virtual sports and further engage with the gaming community, Yelena Isinbayeva, IOC Athletes’ Commission Member asked: “Why don’t we try or even think about including competitions like Counter Strike or Dota into the Olympic programme?

“We used to discuss about virtual sports many times, since the very beginning of computer sport before it grew in popularity. And we’d say, if the Olympic movement doesn’t take it under its umbrella someone else will.

“And now we can see the size of the competition for Counter Strike – it’s huge competition, with a huge amount of prize money and with huge number of participations around the globe. Online, it can be a billion people watching around the globe – and I was one of them, because I was interested to find out what people are watching. And I would say it is really impressive when you understand the rules.”

The need to encompass Esports is clearly not lost on the IOC. In his address, Jean-Christophe Rolland said: “It is a fantastic opportunity that the IOC and the Olympic Movement want to seize in virtual sports – I should even say have to seize.

“Technology continues to develop at an incredible pace. The games… become more and more realistic and the platforms on which they operate become more accessible. Therefore the numbers of people engaged in these virtual forms of sport continue to grow incredibly fast.”

Gianni Infantino highlighted the catalytic effect of the pandemic. “The impact of Covid has introduced many challenges, but it has also accelerated many existing trends. Throughout Covid-19 the gaming industry has continued to grow, highlighted by a 30% growth in gamers, 75% growth in gaming usage and the industry being worth over US$150bn in 2020.

“This growth has been mirrored in virtual sports, where several IFs, including my own, have accelerated our investment and focus on virtual forms of our sport to engage with young people and hosted official virtual competitions.”

Rolland stressed the importance of the roles and responsibilities of IFs in establishing virtual and simulated forms of sports, citing the example of rowing on ergometers at the recent 2021 Virtual Indoor Rowing Championships.

“It is exciting that this recommendation opens the possibilities for IFs to look at potential proposals to include their respective physical virtual sports in the Olympic programme in the future. To be clear, this is only considering those virtual sports which fully reflect the physical activity of the actual sport and are fully governed by the respective IF. They will be considered as a discipline of the sport within that IF.”

But Isinbayeva highlighted that competitive gamers also undergo rigorous physical and mental training. “They train in the gym – training can be eight hours a day like a normal athlete – because they have to be physically prepared to sit for eight hours or more in front of the computer and play the game. Of course they train their concentration, their mental health, because only strong mental athletes can participate on that.

“But I see the tendency that more youth really want to compete in Counter Strike, because they can get money faster than participating in Olympic games and gaining sponsors. They can start to compete there, if I’m not wrong, from age 16 – and from age 18 they can earn good money if they are in the right team.”

“The object of the recommendations is therefore direct engagement through virtual sport and gaming to encourage sports participation and promote the Olympic values, with a special focus on youth.

“The upcoming Olympic hosts in Paris 2024, Milano-Cortina 2026 and Los Angeles 2028 also have a clear focus of reaching out to digital natives in innovative ways, including through the opportunities that virtual sports give to reach out directly to literally anyone anywhere any time.”

Rolland said: “With this additional doorway we will be able to reach out to these young athletes and young audiences at the mass participation level and enlarge the community of people connected to sports. It will also ensure that at the elite level the competitors can be assured they are competing in a well-regulated and well protected competition environment free from manipulation of any kind. And finally, it will allow an official level of regional and global events as these events continue to develop.”

IOC Member Sarah Walker, who sits on the Commissions for Athletes and Digital & Technology, said “As someone who’s into gaming and virtual sport I think there a really cool opportunity for new and young audiences to be interested in the Olympics but also to learn about Olympic values and everything that the Olympics can provide for younger generations. I’m looking forward to how this recommendation evolves and incorporates the engagement with younger generations.”

“Act as soon as possible”

Competing for their attention will be not be easy. “In the future it will be a huge challenge to the Olympic movement, to the traditional sport, this computer sport, which is not less interesting than the Olympic Games,” said Isinbayeva.

“So, to be competitive to this, we have to offer them a better condition – or we can take them under our umbrella, if it’s possible. We don’t know if they will accept this, because being on the Olympic programme has many conditions and restrictions – the qualifying process, the number of participants, the countries, I don’t know – but why don’t we even think about it, why don’t we try? We definitely have to act as soon as possible otherwise we will lose this chance.”

Ultimately, strategy is just as important as speed. “Over the past few years we have taken the first steps into this world of virtual sports and the current context has certainly reinforced the relevance,” said Rolland. “The opportunities are incredible if we approach it with clear strategy and direction.

“The new Olympic Agenda 2020+5 recommendation shapes this direction and we look forward to seizing these vital opportunities, the changing landscape of technology, society and sport bring to us.”