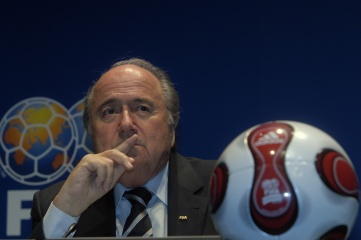 Sepp Blatter has been president of FIFA since 1998

FIFA president Sepp Blatter takes aim at discrimination and lauds the universal expansion of football, as Qatar’s hosting rights and his own presidency continue to come under attack

FIFA’s embattled president Sepp Blatter took the opportunity of addressing his organisation’s congress in Sao Paulo on Wednesday to speak up for integrity in football and highlight the universal reach of the sport.

Standing firm in the eye of a storm over alleged corruption, Blatter said "These are important times for FIFA.

“We must lead by example and we must listen to all voices; we must be responsible and upright in all that we do; we must do the right thing even if that comes at a cost.

“We must carry the flame of responsibility and honesty and always with respect. If not, we will be a traitor to this game we all love.”

Calling on FIFA’s members to unite against prejudice, he said “We can defeat it and we have to do it.

“Suspension and empty stadiums are not enough,” he said, warning that FIFA could expel, relegate or dock points from teams that are linked to discriminatory behaviour.

Blatter’s hard line rhetoric on discrimination echoes remarks he made to the Confederation of African Football on Monday, when he described the latest wave of allegations of corruption as a "storm against FIFA".

His response to allegations made by the UK’s Sunday Times that FIFA Executive Committee members were bribed into voting was to say that the western media is prejudiced.

"Sadly there's a great deal of discrimination and racism and this hurts me. It really makes me sad," he told the Confederation of African Football on Monday.

However, Blatter is expected to announce later in the FIFA Congress that he will not step down in 2015, as he once stated, but that he will stand for a fifth term as president.

"Football is not just a game; it is a multi-billion dollar business. I don't know if that is good or not. It creates controversial situations and then some difficulties. In this changing world little is beyond the reach of politics and economics,” he said.

As for future of football, the boundaries are limitless. “We shall wonder if one day our game is played on another planet. Then we will have not only a World Cup we will have inter-planetary competitions. Why not?”