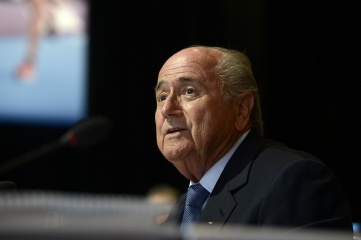 Just four days after his re-election, FIFA president Sepp Blatter has announced he will resign to make way for “fundamental reforms” as corruption charges close in

With charges of corruption within FIFA escalating, president Sepp Blatter announced on Tuesday that he will resign to make way for “deep-rooted structural change”.

At a press conference in Zurich called at extremely short notice, Blatter announced he will resign “at the earliest opportunity”.

The announcement came shortly after reports that FIFA administered an alleged $10m bribe from the South African government to CONCACAF president Jack Warner in 2008, and an ABC News report claiming that Blatter was himself under investigation by FBI and US prosecutors.

Two days before Blatter’s re-election, several officials were arrested in a dawn raid on the Baur au Lac Hotel. The US Department of Justice has since charged 14 officials employed by FIFA and associated agencies with 47 charges of corruption including racketeering, fraud and money laundering.

"Therefore, I have decided to lay down my mandate at an extraordinary elective Congress.”

The extraordinary Congress is likely to be convened between September 2015 and March 2016.

“This will need to be done in line with FIFA's statutes and we must allow enough time for the best candidates to present themselves and to campaign,” said Blatter.

Waiting until the next ordinary FIFA Congress on 13 May 2016 would “cause unnecessary delay”, he said.

Blatter said by stepping down he would be able to focus on reforming FIFA. “Since I shall not be a candidate, and am therefore now free from the constraints that elections inevitably impose, I shall be able to focus on driving far-reaching, fundamental reforms that transcend our previous efforts.

“For years, we have worked hard to put in place administrative reforms, but it is plain to me that while these must continue, they are not enough.”

He also said the structure of FIFA’s Executive Committee and its relations with the continental confederations must be overhauled.

“The Executive Committee includes representatives of confederations over whom we have no control, but for whose actions FIFA is held responsible. We need deep-rooted structural change.

Blatter, who has presided over FIFA for 17 years, also called for term limits, “not only for the president but for all members of the Executive Committee.”

"I have fought for these changes before and, as everyone knows, my efforts have been blocked. This time, I will succeed.”

Blatter has asked Domenico Scala, Independent Chairman of FIFA’s Audit and Compliance Committee to oversee the transition over the coming months.

“Mr. Scala enjoys the confidence of a wide range of constituents within and outside of FIFA and has all the knowledge and experience necessary to help tackle these major reforms.”

Blatter thanked all his supporters, saying “What matters to me more than anything is that when all of this is over, football is the winner."

Prince Ali bin al Hussein of Jordan denied Blatter a majority in the first round of voting in Friday’s election and he has not ruled out standing again.

Prince Ali told CNN "I think this is the right move from Sepp Blatter and I think we have to look to the future.

"I am always there to serve football and I think that's the most important thing and to do so much work to fix this organisation in a proper way.

His resignation was welcomed by IOC president Thomas Bach, who said “We highly respect this decision of President Blatter to step down and to initiate the necessary reforms – and to make way for a new leadership of FIFA to drive these changes.”

Sepp Blatter remains an IOC member until his 80th birthday on 10 March 2016.