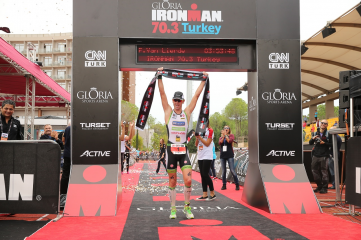 More than 2.500 athletes expected to the Ironman in Turkey

In just less than two months the second Ironman 70.3 starts in Turkey under the patronage of the brand Gloria: On 23rd October 2016 more than 2.500 athletes from over 60 nations are expected to Belek. The second edition of the Gloria Ironman 70.3 Turkey will be held in the memory of Nuri Özaltın, Özaltın Holding Chairman and Owner of the Gloria Hotels & Resorts, which sadly passed away a few weeks ago. Start and final is once again in the beautiful premises of the Gloria Hotels & Resorts: While swimming starts at the beach of Gloria Serenity Resort the finish line awaits the athletes at the Gloria Sports Arena, the largest sports facility of the country.

This race gives 20 qualifying slots for the 2017 Ironman 70.3 World Championship. In 2015 the premiere of the Gloria Ironman 70.3.Turkey attracted 1.224 triathletes from over 60 countries, among them 25 percent of women. Thus, Gloria Hotels & Resorts could write a piece of history. More than 1.000 volunteers supported the event on 25th October in all areas. Together with the Gloria-Team more than 5.000 spectators shared the excitement onsite, while whole Turkey could follow the event on CNNTürk live.

"This year we dedicate the second edition of Gloria Ironman 70.3 Turkey to our Nuri Özaltin, who sadly passed away a few weeks ago. His contribution to tourism and sports in the country is significant", says Mutlu Sagsözlü, Head of Sales & Marketing of the Gloria hotel group. "It is clear enough that sports is the best way to connect cultures and we will continue to work on this branch."

Again this year Gloria is promoting these four disciplines: "Swim, Bike, Run, and Holiday". Gloria Hotels & Resorts target athletes, who not only want to train on-site for the triathlon, but also want to enjoy a relaxing holiday with the family after the challenging event. With its Five-Star resorts Gloria provides a wide choice of accommodation: The bed capacity of all four hotels alone (Gloria Sports Arena Hotel, Gloria Golf Resort, Gloria Serenity Resort, and Gloria Verde Resort) amounts to 3.000. Moreover, there are numerous hotels around the premises of Gloria, which have profited from the event last year clear enough.

The courses of Gloria Ironman 70.3 Turkey
The Ironman-Triathlon in Antalya and Belek will once again be challenging: The swim will start at the beautiful sandy beach of the Gloria Serenity Resort with a 1,9k one loop course in the calm and crystal clear water of the Turkish Riviera. From there the bike will be on a 90k one loop course, parallel to the Mediterranean, taking past the Expo 2016-area – this course has been optimized for this year´s event – and ends at the Gloria Serenity Resort. A 21,1k loop run course leads the athletes on two rounds through the picturesque landscape of the 45-hole Gloria golf course and through the streets of Belek centre back to the finishing line at the Gloria Sports Arena.

Packages in the Gloria Sports Arena
The Gloria Sports Arena offers the ideal platform for athletes, who want to prepare for the triathlon. Diverse packages are available for young and old, among them complete packages for top athletes or for targeted individual training. Balance tests, gait analysis, Speedcourt training, ICELAB-units and more can be booked.

Gloria Sports Arena – the largest sports facility in Turkey
It is 105.000 sq. large – the merely two years old Gloria Sports Arena, Europe´s most comprehensive privately financed sports arena, being the largest facility of Turkey for more than 50 sports disciplines. Next to a track and field stadium for 1.600 spectators, it houses an Olympic Aquatic Centre, a sports science and performance center and further indoor and outdoor areas for trainings of all kinds. There is also a sports hotel with 100 rooms, motivating to high performances with their direct view onto the stadium. The Gloria Sports Arena also convinces with its accessibility. The international airport Antalya is only 30 kilometres away and ideally connected from all important airports of the world. With the Gloria Sports Arena the owners Özaltin Holding have started a project, that is said to be a new landmark for the country´s sport tourism.