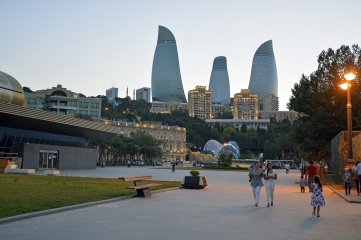 Baku is hosting the first ever European Games in 2015 (Photo: Svetlana Jafarova, Shutterstock)

The Baku 2015 European Games has signed a deal with Tokyo Broadcasting System TV, the first Asian broadcaster to buy rights to the Olympic multi-sports event

The 17-day coverage will include the Opening and Closing Ceremonies, as well as highlights packages across all of their domestic platforms.

“This is the first deal we have announced with an Asian broadcaster and represents a significant step in achieving our aim of ensuring the inaugural European Games is broadcast in all five continents around the world,” said Charlie Wijeratna, Commercial Director of Baku 2015.

The agreement follows on from recently announced deals with the Arab States Broadcasting Union, which will see the European Games broadcast in 20 countries across the Middle East and North Africa, and L’Equipe 21 which will show the event throughout France.

“The Baku 2015 European Games will be an historic event and we are proud to begin what we are sure will develop into a long and fruitful partnership,” said Masamichi Amano, Executive Vice President of TBS Sports.

“We look forward to presenting the inaugural European Games to our viewers across Japan and also introducing all that Baku has to offer the world.”

TBS, a free-to-air commercial broadcaster, has exclusive rights to the IAAF World Athletics Championships in Japan and is part of a consortium of Japanese broadcasters that covers the Olympic and Olympic Winter Games, the FIFA World Cup and the Asian Games.

The broadcaster also has rights to The Masters, The PGA Championship, Major League Baseball and the FIVB World Volleyball Championships in Japan.

Simon Clegg, Chief Operating Officer of Baku 2015, said: “We are delighted to have confirmed this deal with TBS Television to ensure the European Games will receive exposure in the Japanese market.

“As a keen sporting nation, we are sure there will be significant interest in Baku 2015 so it is extremely pleasing to know fans will be able to tune in to the best of all the action.”