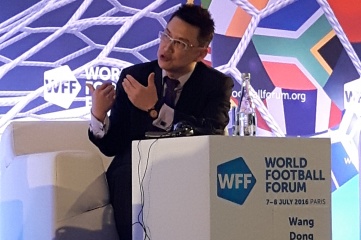 According to DaZhong Zhang, CEO of Alisports, WORA is both a ‘trend-setter and game-changer’.

Alisports has signed a contract with global sport and entertainment agency CSM, who will act as the global strategic partner of WORA. CSM says it will help bring more international events to China and assist WORA in becoming an international road running association.

Road running is growing in popularity in China. In 2015, 134 marathon and related events were registered with the Chinese Athletic Association, representing a 160 per cent growth on the previous year. 84 per cent of provinces held one or more of these events.

“It is this unquestioned popularity that Alisports is looking to seize upon through the implementation of WORA,” CSM says.

100 million running enthusiasts had already signed up in July and WORA’s ambition is to increase this by 50 per cent. Helping achieve this target are the group of members which includes running Apps like Codoon, The Joy Run, Ledongli Hupu Running, Tenmini, Run Again and iHeHa.

WORA aims to deliver the most effective platform by attracting sponsors, funding and resources, through which it can provide more technical servers and operators.

“All of this helps Alisports deliver on its long-term objective of making sports accessible and enjoyable for all,” says CSM.

A series of events called ‘WO.RUN’ (‘I Run’) began in July, aiming to integrate online and offline formats. More than 30 WO.RUN events are taking place across China, attended by 30 different Olympic champions including Ruolin Chen, Man Zhong and Liuyang Jiao.

Runners are able to log their runs online, either from one of the official events or a run of their own, and by doing so will be rewarded with points. These points will translate into savings on purchases made on Alibaba, which is China’s largest online retailer and the owner of Alisports.