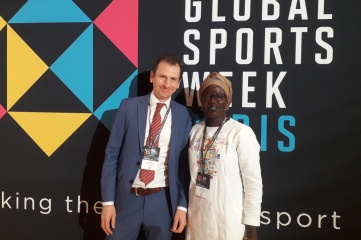 “The time I feel most Senegalese is during a sports game, and it’s the same for most Senegalese people. Our slogan is ‘One People, One Goal, One Belief’. But the only time you see people using it or getting out the flag is during sports events,” Fanta Diallo, Director of Sports, Youth and Community at the City of Dakar told Host City at Global Sports Week Paris.

“Having one of the biggest sports events being in our country and our city is a very important moment for me, to make true our slogan – to be together, and to take on the challenge.”

Dakar is a rapidly developing city, but it still has a lot of challenges. “If we are not facing challenges together, having the same goal and the same feeling about the way we have to use the Games, then we stay an underdeveloped country.

Host City asked Ibrahima Wade, Vice President of both the Senegalese Olympic Committee and the Dakar 2022 Organising Committee how much support Dakar needs from international suppliers to putting on the Games.

“During the candidature phase, Senegal was quite ready because most of the infrastructure that we needed for sport and other areas such as transportation and medical facilities are ready,” he said.

“At the same time we were working very closely with the IOC from November 2018 to December 2019, on the edition plan of Dakar 2022 YOG. We were working hard to define the road map precisely on how to plan and go to the market, so everything is ready.”

This is not only the first time an Olympic event is coming to Senegal, but also to Africa.

“That’s why we are working very closely with all African countries – firstly with the African Union – to let them know that this is not an event for Senegal but for all Africa,” said Wade.

The Dakar 2022 organising committee is planning to include representatives from other African National Olympic Committees (NOCs), particularly from those that were also bidding for the Games: Tunisia, Nigeria and Botswana.

“We are working with Association of National Olympic Committees of Africa (ANOCA), the international alliance of NOCs, with Olympic Solidarity and asking them how to build some OlympAfrica centres in other African countries, in order to show the African community this is not the Games for Dakar, but the Games for all Africa.”

Beyond Africa, Dakar 2022 has a lot of support coming from international federations and other Olympic Games Organising Committees, including Beijing 2022 and Paris 2024.

“We are benefitting from their experience in terms of engagement and environmental legacy. For example, Paris is sending experts to see how we can match and benefit from each other.”

Dakar is also acting as a test bed for Paris by including breaking, surfing, sport climbing and skateboarding, some of the additional sports that will also be included in the 2024 programme.

“It’s very important to put urban sports in the programme as a laboratory for that,” said Wade.

Host City asked if esports might feature in 2022. “No. Maybe for the big Games!”

“IOC President Thomas Bach mentioned this last November when he was in Dakar, saying it’s very important for all of us to make Dakar a success as it’s a good way to open the door for a big summer Olympic Games for Africa,” said Wade.

“I strongly believe that we will succeed, for all Africa. Like South Africa did for the World Cup, we will do it for the Youth Olympic Games.”

An African Olympic Games could also be enabled by changes to the bidding process, which no longer restrict the Games to single cities or even single countries. I ask Fanta Diallo when we might see an African Games bid, and which cities might be included.

“I bet for 2032 we will have African cities being candidates. I would say maybe Casa Blanca, Pretoria and Kigali,” she said.

But for now, it is Dakar’s time to shine. “Just imagine what kind of empowerment this is for the youth. To know that they can do something, because they never have the opportunity to show their talents. Just give them the floor to show that they can succeed in our country. And use the two years we’ve got to show all the talents we have, all the capacity and all the creativity we have in our country. I think it will be a good moment for that.

“We have a common goal – let us use it to solve common problems and really give back to youth the pride in being Senegalese. Let’s show the world what we can do as Senegalese people.”