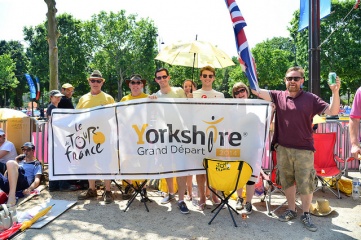 The first ever Tour Makers for the Tour de France in the UK have been selected, with 12,000 volunteers making it through the application process.

The Tour Makers will be the volunteer force that will welcome millions of visitors when the Tour de France Grand Départ begins in and races around Yorkshire for two days and a third stage from Cambridge to London.

Official applications have been now completed and almost 12,000 people have been named as successful applicants and will become a Tour Maker.

The Tour Maker project is a first in the history of the Tour de France's Grand Départs.

Gary Verity, Chief Executive of Welcome to Yorkshire, the agency who led the winning bid to bring the Tour de France to Yorkshire and devised the Tour Maker idea, said: "The response since day one to the Tour Maker project has been unbelievable, with so many people wanting to be directly involved with this historic event.”

Volunteers will be allocated roles by the TDFHub2014Ltd, who are delivering the Tour Maker programme.

Nicky Roche, chief executive of TdFHUB2014 Ltd, which is managing the Tour Makers, said: “I’m delighted that we now have our 12,000 Tour Makers for Stages 1, 2 and 3. The team look forward to working with them and getting to know them over the next few months as they go through the training process.

“The standard of applications was incredibly high, and I know that come July we will have a team of incredible, talented Tour Makers ready to welcome the world to the Tour de France in the UK.”