Home
»
News
»
“How life should be” – Sir Philip Craven MBE 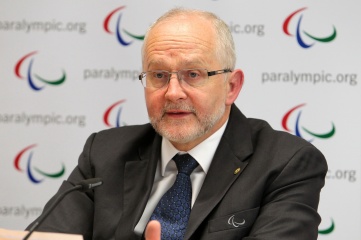 Sir Philip Craven, IPC President, has been an IOC member since 2003 (Photo: IPC)

At a time of crisis in perceptions of the integrity of international sports, Sir Philip Craven MBE, President of the International Paralympic Committee talks with Ben Avison about how the true spirit of sport can make the world a better place

Host City: Having experienced Paralympic Games since 1972, both as an athlete and administrator, what major changes have you seen in terms of participation and audience engagement?
Sir Philip Craven: My first Paralympics were in Heidelberg in ‘72. It was a relatively small affair but with an incredible passion for sport that has always been at the centre of the Paralympic movement.
Really the Games that made the biggest difference for me, despite the amazing London Games, was Barcelona in ’92. That was the first time that there were masses of spectators. It took a bit of time for athletes to get used to having packed stadia. That was a major moment. We again had an amazing Games in Sydney and things have just moved on from there.
What we had to do as an organisation was to develop our organisation so we had sufficient competent and motivated staff that could work with organising committees and ensure that the Games would be of a very good standard and occasionally, when the planets came into total alignment, it would be amazing, like in Beijing and in London.
When I came in I never used the “D-word”. It’s nothing to do with disability sports – this is international sport. We are an international sports organisation and therefore that’s been the emphasis all along. When you talk about sports, then you all get along far better together. That’s one of the reasons for the major rise, along with our capacity to work with organising committees, but always with athletes at the centre.
These Games in Rio are going to be the greatest Games ever in terms of athletic performance. It’s amazing what’s been done in all of the sports; the amount of training that goes into being an international player is quite outstanding.

Host City: Would you say London 2012 was the big step change in terms of public engagement and TV audience?
Sir Philip Craven: Definitely with regard to TV audiences. Channel 4 really got the ball and ran with it two years prior to the Games; there was an amazing transformation and that has been really infectious moving forward from London. They used former athletes as commentators, and they have become a totally integrated employer now.
In Rio there will be over a hundred nations taking a live feed of the Games from Rio around the world. We’ve signed our biggest deal ever with NHK in Japan going forward to the Tokyo Games in 2020 and beyond, to 2024.
People love the Paralympics and the first place to be is at the Games. The unique sporting spirit there is something that I felt when I was playing wheelchair basketball because I loved the sport; I loved playing for the team. This spirit of the principles of what sport should be about has never been stronger with me.

Host City: The motto of the Olympic Games is “faster, higher, stronger”; how does that differ to the Paralympics, in terms of the underlying principles of sport?
Sir Philip Craven: Our vision is “to enable Para athletes to achieve sporting excellence and to inspire and excite the world”. “Achieving sporting excellence” for me is at any level – it doesn’t have to be a Paralympic medal.
And then “to inspire and excite the world”. But what happens before people are inspired and excited? They’re surprised, normally – I don’t know if they were expecting the basketball players to drop the ball – but they are surprised, then they are inspired, then they’re excited. Once that happens we can change the world.
We know that the Paralympic Games has the greatest effect of any international sports competition in really delivering societal change – realising that we are all members of one planet and one society, and that we can all have a good time.

Host City: It’s interesting what you say about the big societal impact of the Paralympic Games – we saw that in Beijing and London. But it seems the Olympic Games needs to assert its value now, with some of the big Olympic sports facing wave upon wave of doping allegations. Having recently chaired a panel discussion at the International Anti-Corruption Summit, what’s your view of that?
Sir Philip Craven: On what we have heard about in the media, it’s seen to have been denied by certain international federations. On the one hand I am saddened, on the other hand I am angered – because that is not what sport should be about.
But I have to say, the IOC – of which I’ve been a member since 2003 – has done a lot of work to root out corruption from their own organisation and that’s going back now 15 or 16 years. And I think they continue to do that good work, taking an enlightened view of keeping samples from the Beijing Games and then retesting them.
The IOC, IPC and WADA and all international sports federations are working very hard now, with increasing support from national governments and other international bodies. Corruption, as David Cameron said, is a cancer and we have to root it out. And that’s what we will work together to do. The change has to come from the inside of sport, and they have to be supported by people from other walks of life, from governments and it’s something we are going to fight with all our might.

Host City: How optimistic are you that that this fight will be won?
Sir Philip Craven: I’m an eternal optimist; I can tell you that. It will be won. The key is it’s not just about bringing in rules and regulations that stop the corrupt; it’s bringing in methods where the non-corrupt are elected in the first place.
If you look at the majority of international federations, you would find that that is the case. But of course when you find difficulties from certain federations, then they can influence the general view of what’s going on in all international sports federations.
You can’t change cultures overnight, no matter what anybody says, no matter how much money you’ve got. Because normally those cultures have built up over many years so it takes time to change it. But there’s got to be a fundamental clear out and to start again.

Host City: It strikes me these threats facing sports governance today are the polar opposite of the principles of sport, which should be about team play and rewarding endeavour.
Sir Philip Craven: The principles of what sport are really about are right at the centre of what we do. We’ve just had recent discussions in our governing board about this and we’ve brought in new controls on conflicts of interest, divulging whether you are involved with other organisations other than the International Paralympic Committee etc. – and we are very keen to bring these in.
Fundamentally we are an absolutely transparent organisation; you can look at our accounts online whenever you wish to. If you are a transparent organisation then those sort of corrupt practices don’t have a chance to get going.
I would say the high honour of Thomas Bach inviting me to chair the new Olympic Education Commission shows the clear intent of what you put very well when you talked about the principles of sport. It’s an absolute intent that there is a great strengthening of this, and that’s what sport needs.
In fact that’s what the world needs – principles and common sense regulations – not things that are brought up by overpaid lawyers, but things that come out of how life should be and how people should get on with each other. That’s what I’m about!