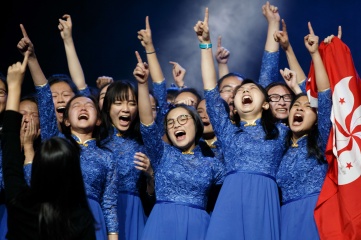 "When one choir sings that's great, when two choirs sing together that's better, but when you get as in these INTERKULTUR events with many choirs, then there is an energy which flows from it, which is not like anything else, except maybe a great sports event" — John Rutter, composer (Great Britain).

Choir competitions bring out a feeling that you can’t really get anywhere else, except maybe at a big sporting event like the Olympic Games. And that’s why the World Choir Games started in the first place to give singing its own huge event — bringing the excitement and unity that we feel at major sport events into the world of singing.

And that is why in 2022, INTERKULTUR is doing something big again. Sing for Gold — The World Choral Cup will take place in Calella/Barcelona. It’s an exciting addition to the World Choir Games, and another opportunity to see a global community of choirs compete in this new competition with a clear reference to the world of sports: This new event will feature choirs from all around the world, all vying for the first ever World Cup of Choirs!

And, when you start to think about the world of sports and competitive singing, you find a lot of similarities. Maybe it shouldn’t be so surprising that they deliver such a similar feeling.

The Sport of Song

Anyone who has sung in a choir knows that it is truly a unique experience. When your voice joins with others, following music that you have practiced together for a long time, magic happens. You start to lose yourself in the activity, and for a while, the group works as one.

That feeling of community is special. It’s a big part of why choral music will always be an important part of the art and culture of humanity.

And anyone who has played team sports will know that this same feeling can appear on the field (or the court, or wherever else the game is played). Playing together with a shared goal brings teams in unison. There are moments in a game when the team is completely absorbed in the act of seeking victory, working as one. Again, it’s magic.

Part of the unity in both choral singing and team sports comes from the physicality of both. Singing at a high level is a full body workout, and in a choir, you have to match your performance to others. It really is physically demanding like any sport, pushing singers to treat their bodies well.

And there is an even bigger kind of unity that begins to form in both competitive choral singing and sports. Because there are people in the stands who become attached to the action.

You can really feel it at the World Choir Games. Spectators come to see their country’s choir succeed. It isn’t that they want anyone to lose, it’s that they feel a certain pride in their own country’s singers. And who can deny that the same is true of the world of sports?

Feeling all of this connection to others is the essence of what it means to be human. We connect with an important part of ourselves that is often absent from much of our day-to-day life.

And when you add competition into the mix, the excitement that can erupt is pure joy.

In the World Choir Games, as with any sport, the competition drives the action. It gives people a goal and forces them to be better than they’ve ever been before. And it creates a framework to understand exactly what you need to do to succeed.

It’s like a dramatic machine — instantly producing emotional highs and lows that we all feel together.

The Electricity in the Air

These features make it clear that competitive singing and sports have a lot in common. And events like the upcoming SING FOR GOLD — The World Choral Cup 2022 in Calella/Barcelona or the World Choir Games and its worldwide Choir Olympic Movement promise to deliver the same thrills as the next big sporting event.

Go and visit www.worldofchoirs.com to find out how you can host a huge choir event in you host city bringing it the same energy and emotional feelings as any big sports event!