Home
»
News
»
US to choose 2024 Olympic candidate in January 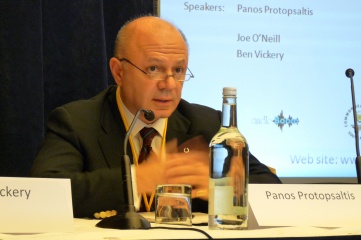 Panos Protopsaltis, advisor to the USOC, pictured at HOST CITY Bid to Win

US Olympic Committee will not select its candidate city for the 2024 Olympic Games until January, but one of its advisors points out some decisive factors to HOST CITY

The US has officially confirmed that it is bidding for the 2024 Olympic Games but will not reveal its preferred candidate until January 2015.

Boston, Los Angeles, San Francisco and Washington DC all presented their plans to the US Olympic Committee (USOC) board of directors on Monday, after a six months consultation programme.

“At our request, and because of the preliminary nature of our discussions, the cities have not spoken about their bids publicly in great detail,” said USOC CEO Scott Blackmun.

Panos Protopsaltis – speaker at HOST CITY Bid to Win and Olympic transport expert – is advising the USOC throughout the candidate city selection process.

Asked to discuss the relative merits of the candidates, Protopsaltis began by talking enthusiastically about Washington DC. “It is the capital city and all central infrastructures are there – not only transport but technology infrastructures, integrated command and control structures.

“Then you have a city like Boston with an economy which is doing very well in a city that is very small – geographically it is the smallest of the four.

“San Francisco is completely different, and then you have LA which is biggest of them all. They are in the middle of a multi-billion dollar transportation programme, upgrading and expanding urban rail systems – that is a programme they have irrespective of the Games.”

City development plans will form an important part of the evaluation of the candidate cities, Protopsaltis said. “Starting as a foundation, what is your plan for the next five to ten years for the city? What changes in infrastructure are you going to make and why are you going to do it?”

“All four cities have presented plans that are part of the long-term visions for their communities,” said USOC CEO Scott Blackmun.

“At our request, and because of the preliminary nature of our discussions, the cities have not spoken about their bids publicly in great detail. That will be an important part of the process after we make our selection in January.”

The USOC will continue discussion the technical elements required to host the Olympic and Paralympic Games with the candidates in the coming weeks.

“We are excited to announce our plans to put forth a bid for the 2024 Games and look forward to taking the next step of selecting from a group of four world-class cities to present a compelling and successful bid,” said USOC Chairman Larry Probst.

“We’re grateful to the civic and political leaders in each of the four cities for the partnership that’s been demonstrated thus far, and confident that the deliberative process we’ve put in place is going to result in a strong U.S. bid that can truly serve the athletes and the Olympic and Paralympic movements.”

The deadline for submitting a bid to the IOC is 15 September 2015 and the host city will be elected in 2017.

The US last hosted the Summer Olympic Games in 1996 (Altanta). Los Angeles has hosted the Games twice before, in 1932 and 1984, and win for 2024 would make it only the second city after London to host the Games three times.

Earlier in the week, Rome officially announced that it will bid for the 2024 Games. Germany is also expected to enter the race, with Berlin the more widely preferred candidate over the alternative, Hamburg.

Several other cities worldwide have expressed an interest, including Baku, Budapest, Doha, Istanbul and Paris. South Africa is also expected to put forward an applicant city.