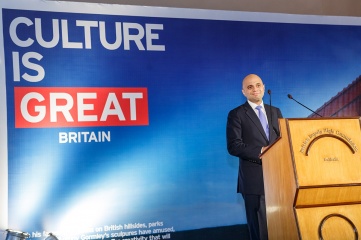 Seeking to boost the UK’s business events sector, the culture secretary has confirmed a bid for the World Expo 2025 – and the candidate city might not be London

As anticipated by HOST CITY last year, a bid from Britain for the World Expo 2025 has been confirmed.

The UK culture secretary Sajid Javid said the need to boost the business events sector is a major driver for bidding for the World Expo.

The government is currently speaking with tourism bodies and the business events sector to decide on a location to put forward as a candidate for the World Expo 2025.

“Britain is renowned for putting on some of the biggest events in world sport, following the success of the London 2012 Olympic and Paralympic Games,” Javid said.

Since 2012, London has twice been voted the world’s “Ultimate Sports City”.

However, London stands only tenth in the International Congress and Convention Association’s global ranking of numbers of business events hosted.

The UK’s intention to bid was announced as the government published its “Business Visits and Events Strategy” that seeks to attract some of the biggest global fairs and conferences to the UK’s cities.

“I want us to increase our standing in the business events world and host more major conferences that can help generate growth for our economy and create jobs,” said Javid.

“Bringing the World Expo to the UK in 2025 would be a major coup and give us another great opportunity to champion the best of Britain to the world.”

The UK’s candidate city will be competing for the Expo against world cities such as Paris, which announced its intention to bid last year.

After selecting a candidate city, the UK will need to produce a candidature file that demonstrates its technical capability to the Bureau International des Expositions (BIE).

Speaking at HOST CITY Bid to Win in October 2014, Dimitri Kerkentes, chief of staff at the BIE said: “We need to be able to be accountable, to say that when this project was approved to go forward to the voting stage we saw that you have the capacity to pull it off – whether it’s in four years’ time or nine months’ time – we saw that you have everything that’s technically required to host an Expo.”

Bidding for and hosting a World Expo will again be a key topic of HOST CITY 2015, the largest meeting of cities and sports, business and cultural events.