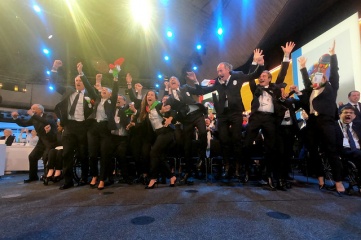 Members of the International Olympic Committee (IOC) have voted to grant the 2026 Winter Olympic and Paralympic Games hosting rights to Italy’s Milan-Cortina ahead of a rival bid from Stockholm- Åre.

The decision was made in Lausanne, following a lengthy bidding and consultation period and a day of presentations from the candidates.

The result was close, with the Italian bid winning 56% of the 81 votes cast.

Sustainability, financial guarantees and public support were key issues in the campaign.

“We can look forward to outstanding and sustainable Olympic Winter Games in a traditional winter sports country. The passion and knowledge of Italian fans, together with experienced venue operators, will create the perfect atmosphere for the best athletes in the world. The Olympic Winter Games Milan-Cortina 2026 will feature iconic venues and beautiful settings, combining the attractions of a modern European metropolis with a classic Alpine environment.”

The bidding process was the first to begin and end since the launch of “Olympic Agenda 2020”, the revised procedure set up by president Bach.

“The new Candidature Process has demonstrated the success of Olympic Agenda 2020,” he said.

“We have lowered the cost and complexity of developing Games projects, which now serve the long-term development goals of the host communities and have sustainability and legacy at their hearts. This has led to a significantly reduced organisation budget and the use of 93 per cent existing or temporary competition venues. I also want to thank Stockholm-Åre for presenting an excellent candidature and being part of the Candidature Process for the Olympic Winter Games 2026.”

Announcing the decision, the IOC highlighted Italy’s strong tradition of winter sports and world class venues, in addition to the use of “existing and temporary venues if there is no post-Games demand for new permanent facilities”.

Only one of the competition venues will be a new, permanent structure.

The IOC also noted the “unified backing of the Italian sports movement, the private sector and national, regional and city governments”.

While Stockholm- Åre’s project had the support of the government it would have been heavily reliant on private funds.

The IOC is amending the process of awarding host cities further still to make the process even more consultative, as part of "The New Norm" reforms. The fact that there were ultimately only two bids to choose from for 2026 – as was also the case for the previous bidding cycle in which the two candidates Paris and LA were each awarded 2024 and 2028 respectively – will have been a factor in bringing in these further changes.

The changes already introduced through Agenda 2020, such as increased technical services and a reduction in the required deliverables and presentations, has reduced candidature budget by 75 per cent, according to the IOC.

It also said the operating budgets proposed for 2026 are 20 per cent lower than the candidates for the previous two bidding cycles.