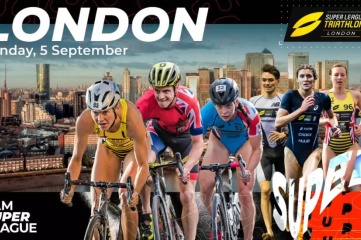 Super League will move into major cities for the first time with stops in London, Munich and Malibu, as well as a return to Jersey.

Reigning Super League champions Vincent Luis and Katie Zaferes will be back to defend their Championship Series crowns, and will compete against the cream of short course triathlon talent such as Georgia Taylor-Brown, Jonathan Brownlee, Beth Potter and Kristian Blummenfelt.

The four events will take place on back-to-back weekends throughout September, providing audiences with a compelling calendar that delivers greater engagement and a more exciting race Series.

There will be 20 female and 20 male athletes competing at each event on a single day of racing over Super League’s exciting formats. As well as the athletes contracted across the Series, the start list for each event will include a small allocation of Wildcard slots to be filled nearer the time.

Racing in London will take place at West India Quay, at the Olympiapark in Munich and at Zuma Beach as part of the Malibu Triathlon, with Jersey’s event set to feature at St Helier for the fourth time. Individual event details and announcements around global broadcast deals will be made in the coming months.

“To be able to deliver a Championship Series in a condensed time period in the calendar straight after the Olympics and to follow our strategic ambitions to visit major cities in key markets has been a goal we have been working towards since Super League was established just four years ago. Our first Championship Series events in the UK, Germany and the USA are significant milestones.

“Securing the best athletes in the world to race across the Series as we build on the success of the SLT Arena Games to host outdoor events again in iconic locations will help to elevate our sport.”

Multiple Super League Triathlon winner Vincent Luis said: “First of all, it is amazing that we can race and Super League puts such effort into us racing.

Jersey is my favourite venue of all time, and I look forward to seeing what London, Munich and Malibu have to offer. In these kinds of races, you enjoy from the start to the finish. It will be a really good build-up to the Olympics and then Super League to enjoy with four races in a row. I can’t wait. Putting the race tyres on the bike, getting the race suits ready… it’s just around the corner.”