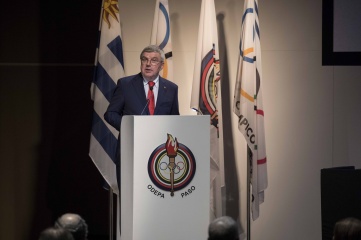 The cost and complexity of bidding can create political reasons not to bid for the Olympic Games, IOC president Thomas Bach admits as another bidding city announces its withdrawal

International Olympic Committee (IOC) president Thomas Bach has admitted the Olympic Games bidding process is an issue that “cannot be ignored”, despite the strong support of broadcasters, sponsors and rights holders.

After the withdrawal of Budapest, Hamburg and Rome, just two candidate cities – Los Angeles and Paris – are left in the race to host the 2024 Summer Olympic Games. And now Stockholm has announced it will not bid for the 2026 Winter Olympic Games.

Bach said the Olympic Games are being used for political aims in some countries.

“What we have seen is a change in the decision-making procedures in different countries – particularly in Europe but also elsewhere,” he told delegates at the General Assembly of the Pan American Sports Organization (PASO) in Uruguay.

“I do not need to go into detail about how the Olympic Games is used for political purposes by groups in some countries.

"We have to understand that our candidature procedure is giving arguments for this as it is too expensive and too complicated. “

Budapest and Hamburg both withdrew from bidding for 2024 after holding referendums.

Similarly, the 2022 Winter Games bidding procedure was reduced to two contenders – Beijing and Almaty – after the withdrawal of the European cities of Stockholm, Lviv, Krakow and Oslo.

And shortly after Bach’s comments, it emerged that Stockholm is now withdrawing from bidding for the 2026 Games due to a lack of cross-party support and clarity around finances.

Stockholm Mayor Karin Wanngard said in a statement: "We Social Democrats have always thought that the Olympic Games are important for Stockholm's growth and development… Unfortunately, we are alone to have this position about the Olympic Games."

Speaking in Uruguay, Bach said “The good old times are over with regard to candidature procedure.

“Today hardly any Mayor or political authority can go to their population and say, ‘Let’s try again, and maybe we will win’ after spending millions on an unsuccessful bid.

“Maybe it will change back in five or 10 years, but it is not possible today.”

Bach stressed that, despite the apparent lack of enthusiasm from host cities for hosting the games, the Olympic Games remains commercially secure with long term agreements with sponsors and broadcasters in place.

"We have contracts on the TV side until 2032 and we have TOP sponsors on board until 2028 and there are more in the pipeline."

He also said relationships with rights holders was stronger than ever.

Such is the level of concern about the prospects for future Olympic bids that a working group comprising four IOC vice presidents is currently assessing the possibility of awarding the 2024 and 2028 Summer Olympic Games simultaneously to Los Angeles and Paris.

The host city election for 2024 – and potentially 2028 – takes place in Lima in September.