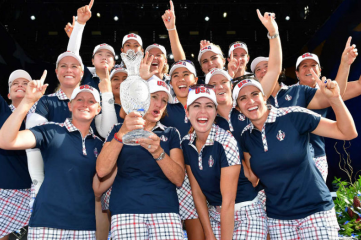 Scotland is celebrating becoming the next host nation of The Solheim Cup following the official handover to Gleneagles at the culmination of the 2017 event at Des Moines Golf & Country Club in Iowa.
The American team triumphed over Europe in a thrilling contest which showcased the very best of women’s golf and now the responsibility for staging the biggest event in the women’s game rests with Scotland when Team USA will look to defend the title at Gleneagles in 2019.
The official handover was recognised at the closing ceremony of The 2017 Solheim Cup during which junior golfers Anna Mackay and Eilidh Henderson accepted the honour of hosting the 2019 event on behalf of Scotland.
Anna and Eilidh were chosen to represent Scotland as part of the #Project19 initiative which saw six junior girls attend The 2017 Solheim Cup as part of Scotland’s delegation to experience a major event and inspire them looking ahead to 2019.
The closing ceremony, which was broadcast worldwide, also featured a performance from up-and-coming Dundee band BeCharlotte to showcase the very best of young Scottish talent in both sport and music.
The 2019 Solheim Cup will take place at Gleneagles from 13-15 September 2019 with the PING Junior Solheim Cup played at the same venue earlier in the week. The event underlines Scotland’s commitment to supporting women’s golf and growing junior and female participation as well as showcasing Scotland as a world-class golf tourism and events destination.
Scotland’s staging of The 2019 Solheim Cup is being led by the EventScotland team within VisitScotland’s events directorate. Paul Bush, Director of Events with VisitScotland, said: “We have witnessed a truly world-class exhibition of golf in Des Moines for The 2017 Solheim Cup with huge crowds supporting both teams and a massive worldwide TV audience.  I hope this success has whetted the appetite of spectators for Gleneagles and demonstrated the sheer scale of the event coming to Scotland in 2019.
“It was a great experience for our junior golfers Anna and Eilidh, and an up-and-coming band in BeCharlotte, to represent Scotland in the handover and demonstrates our commitment to using The Solheim Cup as a vehicle to supporting young Scottish talent.”
Tickets for The 2019 Solheim Cup will be going on sale from Thursday 24th August on www.solheimcup2019.com with daily, weekly and family packages available. As well as attracting a strong golfing audience in Scotland, the event will also be aimed at families with a host of family-orientated activities available on site.
It is also a key event in Scotland’s goal of growing golf tourism with a number of Authorised Tour Operators already promoting travel packages to The 2019 Solheim Cup. Currently 12 per cent of golf visitors to Scotland are women but The Solheim Cup offers the opportunity to promote Scotland, the Home of Golf, to many more female golfers.
Golf tourism is currently worth £286 million annually to Scotland with a target to grow that to £300 million by 2020.