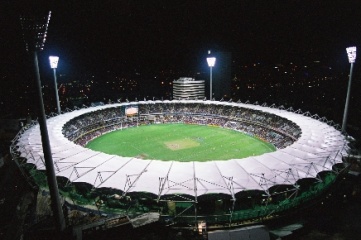 [Source: Tourism & Events Queensland] An Easter blockbuster between the Brisbane Lions and Collingwood has been locked in at the Gabba for the next two years, Tourism Industry Development Minister Kate Jones has announced.

Ms Jones said the game between the two AFL powerhouses would be played at the Gabba in 2020 and 2021 in a fixture that traditionally draws huge crowds.

“We work hard to secure footy games that we know will draw huge crowds and generate a great return for local businesses in Queensland,” she said.

“The Pies love to fly north for the winter – we proved that earlier this year.

“That’s why we’ve worked closely with the AFL and with both clubs to get this deal over the line.”

Today’s announcement is part of a three-year deal that will see the Lions play Collingwood at Easter for the next two years and another Victorian team in the third.

Ms Jones said Queensland’s share of the domestic tourism visitor market was growing faster than NSW and Victoria – with major events helping to deliver a strong windfall for operators in the Sunshine State.

“When it comes to major events, Queensland is kicking goals. Earlier this year we used this fixture to successfully market Queensland in Victoria - one of our key source markets,” she said.

“Off the back of this deal, we’ll run another marketing campaign in Melbourne to showcase the amazing tourism experiences on offer here in Queensland.

“Huge events like this give people a reason to travel. While they’re here, we want them to stick around and enjoy what we have to offer.

Mr de Brenni said AFL in Queensland has this year gone from strength to strength – with the Lions roaring to the top of the ladder, and the women’s team doing us proud following another great season of AFLW.

“When young Queenslanders see the Lions at the top of their game, they have something to aspire towards – and it pushes them to get involved.

“We’re backing our local clubs and investing in the top-end of the sport, with $35 million in upgrades to the Gabba progressing and a contribution into the new game-changing $70 million AFLW Stadium ‘The Reserve’ which is getting underway.”

“We are thrilled that the AFL have entrusted us with the Easter Thursday clash for another three years here at The Gabba,” he said.

“We believe we have been rewarded after producing a successful year on and off the field with growth in membership, crowd attendance and making our first AFL Finals Series in a decade.

“Chris Fagan and his men play an exciting brand of footy that will light up The Gabba and tv screens each Easter for the next three years."