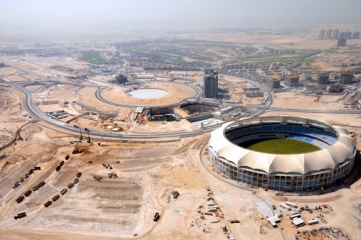 Dubai may be planning an Olympic Games bid inspired by the success of Qatar's winning World Cup bid and aided by a vast array of sporting arenas and infrastructure.

Dubai government officials have revealed plans to expand the emirate’s sporting facilities with an eye to bidding for a future Olympic Games.

Ali Omar, Director of Dubai Sports Council sports development department, recently revealed that those intentions are still in place. “Hosting the Olympics is a dream,” said Omar. “We hope to submit such a bid within the next eight years, God willing.”

Their Gulf Arab neighbours Qatar have been rumoured to also be considering a bid for the 2024 Games, for the city of Doha, following their success in securing the 2022 FIFA World Cup.

Omar cited Qatar’s success as an important factor that could help Dubai bring another major global event to the region. "Qatar's move has brought the world's attention to professional sports in the whole Gulf Arab region," said Omar.

Dubai already has a prestigious history in hosting global sports events including the Sevens World Series, the Dubai World Cup thoroughbred horse race, the Dubai Desert Classic golf tournament, the Dubai Tennis Championships and a number of international cricket matches due to political unrest in Pakistan. Dubai will also host Expo 2020, a universal exposition taking place over six months which could  set the stage for hosting an Olympic Games shortly afterwards.

The Dubai Sports City, a 50 million square feet purpose-built sports hub, would also add considerable weight to the bid with a 60,000 seated multi-purpose outdoor stadium, a 10,000 seated indoor arena, rugby and hockey stadiums and a golf course all situated within the colossal development.

The National Olympic Committee of the United Arab Emirates estimated in 2011 that 70 percent of the infrastructure needed for a Games in Dubai was already in place. But despite this Dr Ahmed Al Sharif, Dubai Sports Council secretary general, recently told media that more stadiums and facilities would be needed in order to host an Olympic Games in the city.