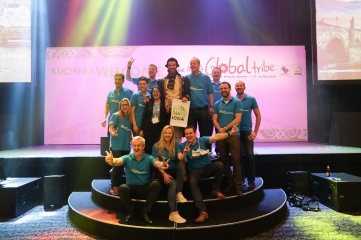 The handover was symbolised by the passing over of the ICCA Congress flag.

The International Congress and Convention Association (ICCA) 56th Congress will take place in Prague from 12 to 15 November 2017.

The Prague Convention Bureau and other Local Host Committee representatives received the formal handover from the 2016 Congress hosts during the Congress Closing Ceremony on 16 November 2016 in Kuching, Malaysia.

Martin Sirk, ICCA CEO said: “Our Czech hosts really grabbed the opportunity to showcase why they were awarded the chance to host the ICCA Congress, not only highlighting Prague’s cultural appeal, but also by supporting the presence of a particularly impressive Czech technology expert speaker in this year’s education programme, to let our members know they will be intellectually stimulated at the 2017 Congress as well as inspired by the city itself.”

The handover was symbolised by the passing over of the ICCA Congress flag. Delegates at the closing ceremony in Kuching were treated to world-class opera singing from Martin Matoušek, a short introduction on why Prague has become one of Europe’s top meetings destinations, and an authentic Czech lunch menu.

“Based on our estimates, around 1,200 event planners and association representatives could attend the Congress in Prague, which would be a record number in the whole ICCA Congress history,” said Roman Muška, Managing Director at Prague Convention Bureau.

“A key contribution of this event to Prague lies in increasing awareness about MICE opportunities of Prague and the Czech Republic and not only among the Congress’s delegates, but thanks to the communication accompanying the next edition of the Congress among the professional community as well.”

Prague Convention Bureau has also launched also a year-long marketing campaign and social media contest “Bridge to Prague” to promote the capital as an important historical, cultural and business crossroad.

The campaign builds on the celebrations of the 660th anniversary of the laying foundation stone of Charles Bridge – one of Prague’s famous monuments.

ICCA is a global community and knowledge hub for the international association meetings industry. ICCA represents specialists in organising, transporting, and accommodating international meetings and events, and comprises over 1,000 member companies and organisations in over 90 countries worldwide.

The annual ICCA Congress serves as a platform for networking, education and best practice sharing for the association’s members and pre-selected association delegates from the meetings industry.