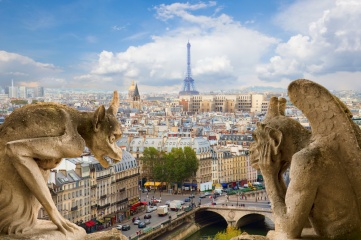 A public consultation between now and June will determine whether Paris proceeds with a bid (Photo: Neirfy/Shutterstock)

Councillors in Paris have voted in favour of bidding for the 2024 Olympic Games, subject to a public consultation over the coming weeks

A bid from Paris for the 2024 Olympic Games overcame a significant hurdle today as the city’s councillors voted in its favour.

The next step will be a public consultation before a final decision on the bid will be made in June.

A recent national opinion poll found that 61 per cent of the French public would be in favour of Paris hosting the Games.

"Now we are off on an Olympic adventure," said Anne Hidalgo, Mayor of Paris.

According to local sources, 163 city councillors voted overwhelmingly in favour of bidding for the 2024 Olympic Games, with support coming from the majority of political parties.

President Francois Hollande, who publically backed the bid in November, is due to meet with IOC president Thomas Bach on in Lausanne on Thursday to discuss Paris’s potential candidacy.

Paris last hosted the Olympic Games in 1924, which would make 2024 a centenary event for the city.

It last bid for the Olympic Games in 2012, which went to London despite Paris being the early favourite.

Bernard Lapasset, vice president of the French National Olympic Committee, presented a report to Hildago and the government on Thursday.

"France has the qualities to win," he said.

If the public consultation works out in favour of the bid, Paris would join Rome, Hamburg and Boston in a competitive race.

The Indian Olympic Committee is also said to be considering a bid for the 2024 Olympic Games.

Once a city has announced a bid, it can work with the IOC through its new “invitation phase” of the Olympic bidding procedure. The deadline for applying to bid for the Games is September 15th 2015.