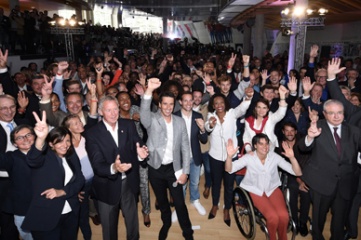 Paris officially launched its long anticipated bid for the 2024 Games on Tuesday, with a message of strong backing from the state and the public.

The leaders of the bid also said a referendum was unlikely to be required.

In its bid to host the Games, Paris is competing against Boston and Hamburg, which both face public referendums in order to progress their bids, as well as Rome and a likely bid from Budapest and other potential contenders including Baku and Doha.

“We are all very much motivated and enthusiastic to be able to achieve unanimity in this ambition to make Paris an Olympic and Paralympic city in 2024,” said bid committee chairman Bernard Lapasset.

“Bidding for the Games is a unique and exciting project for a country. This is an ambitious project that goes beyond sport, as its reach is global and significant impact at all levels and for the whole country.

“As we move forward with our bid, it is very pleasing to see today that we already have the full support of the city, regional and national governments as well as the CNOSF and the French sports movement – it is wonderful to also receive significant public support and real backing from our athletes.”

Lapasset added that the bid would “excite, unite and enthuse the people of Paris, our entire nation and lovers of Olympic and Paralympic sport all over the world.”

Asked by Le Monde after the launch if there would be a referendum on the bid, Lapasset said “I don’t think there will be one.”

This position was backed up by Etienne Thobois, chief executive of Paris 2024 bid committee who told media: “As of today there is no plan for a referendum at this stage.”

Lapasset and Thobois reportedly both stressed that public consultation will be crucial as the bid progresses.

But Thobois said “We are looking forward, we are not looking backwards… we are into Agenda 2020, not Agenda 1920.”

The mayor of Paris, Anne Hidalgo, said Paris was “looking forward to an exciting and bold future whilst remaining true to its rich sporting and cultural traditions.

“We aim to highlight the unity and the solidarity of a cosmopolitan city, which I am sure will be one of the key strengths to win.”

The host city of the 2024 Olympic and Paralympic Games will be elected by IOC members in a secret ballot at the body’s 130th Session in the Peruvian capital of Lima in September 2017.