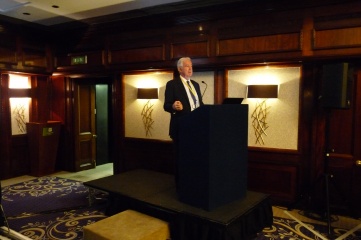 “The value of the prize is so enormous.” Sir Craig Reedie, IOC vice president

The bidding process for the Olympic Games is too long and causes unnecessarily high costs, according to members of Bidding Procedures Under Review panel at Host City: Bid to Win event

Members of the panel “Bidding Processes Under Review” at Host City: Bid to Win in London on Tuesday highlighted the first stage of the bidding process for the Olympic Games as being too long and raising expectations and costs at too early a stage.

“It is the first process that needs to be reduced and then six months before the decision the bid should be formally placed,” said Stefan Lindeberg, president of the Swedish Olympic Committee.

Stockholm dropped its bid for the 2022 Winter Olympic in January 2014 when senior politicians and city officials baulked at the rising estimated cost of hosting the games.

“The bid process has become an expensive competition and not because of the IOC requirements but because the bidding process is too long,” said Antonio Fernandez Arimany, director general, International Triathlon Union and former bid leader of Madrid 2016.

“The bidding process is too long and you spend the maximum resources on that bid – this could be reviewed,” he said.

The panel included Sir Craig Reedie, vice president of the International Olympic Committee. “It is possible to revise the bidding process, but is difficult to tell cities what they may and may not do and then enforce this, because if the city is determined to win a prize they will go beyond what the IOC requires,” he said.

“The value of the prize is so enormous.”

“It seems to me the IOC faces a communication gap,” said Reedie.

“At no time did we invite Sochi in Russia to make a USD 51bn contribution,” said Reedie.

The bidding procedure for the Olympic Games is currently under review, through the IOC's Olympic Agenda 2020 initiative. 40 recommendation have been made to the IOC Executive Board. The recommendations will be presented, discussed and voted upon by IOC members at the 127th IOC session in Monaco on 8 and 9 December.

Host City: Bid to Win was held in London on 28 October 2014 and acted as a unique dialogue platform between cities and rights holders.