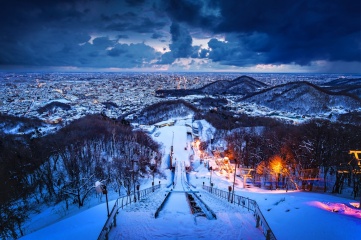 Sheikh Ahmad Al Fahad Al Sabah says Sapporo has “all the tools, all the facilities and all the experience” if it bids for 2026 Games.

The president of the Olympic Council of Asia (OCA), Sheikh Ahmad Al Fahad Al Sabah, believes Asia is ready to stage a third consecutive Winter Olympics, should Sapporo decide to commit to an official bid for the 2026 edition.

Sheikh Ahmad said Sapporo had “all the tools, all the facilities and all the experience” to organise the Winter Olympics for a second time, following the city’s hosting of the 1972 Winter Games.

“I am happy to hear that Sapporo is ready to host the Olympic Winter Games. Sapporo is capable and ready,” he said.

The next two Winter Olympics will be held in Asia – at PyeongChang, Korea, next February and Beijing, China, in 2022 – and Sheikh Ahmad said one of the key factors for Sapporo would be how many cities showed a firm interest to host the 2026 Winter Games.

“I am happy and proud because, after Beijing, Asia will be ready to host the Olympic Winter Games again,” he added.

“If there is a lot who bid, we will have to evaluate the situation, but if not then we have a good chance. We are ready to host a third Olympic Winter Games.”

Sheikh Ahmad said Sapporo held “special memories” for the OCA, having played a pioneering role in establishing the Asian Winter Games (AWG) in 1986 and now hosting the event for the third time in eight editions.

That first AWG attracted only seven teams, but that figure has grown to 32 for Sapporo 2017, including guest teams from Australia and New Zealand.

“A lot of the Olympic champions have started in the Asian Winter Games, and we wish our athletes from Sapporo 2017 can win a medal at PyeongChang 2018,” he said.

“We have seen our athletes win medals at the Winter Youth Olympic Games in Lillehammer in 2016 and now we find their names in our Asian Winter Games. This is what we are trying to do – to prepare a good environment to show their talent.”

Sheikh Ahmad also spoke of next year’s Asian Games in Indonesia, and described OCA sports events as a testing ground for the world, with the five new Olympic sports for Tokyo 2020 all joining the Asian Games programme.