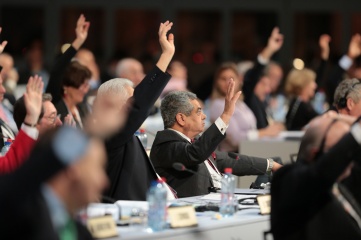 A day ahead of schedule, members of the International Olympic Committee approved all 40 Olympic Agenda 2020 recommendations at the 127th IOC Session in Monaco on Monday.

96 of the IOC’s full membership of 104 were in attendance to vote on the recommendations. IOC president Bach, who instigated Olympic Agenda 2020 shortly after taking to the helm in 2013, praised the members in approving this “strategic roadmap for the Olympic movement”.

Two days had been allowed for the approval process, but all recommendations were approved on Monday, with no votes against and no abstentions. At the close of Monday’s meeting, members gave their unanimous support for the entire set of recommendations in an “en bloc” vote.

“The speed at which Olympic Agenda 2020 was approved showed the great support and determination of the members to make it happen”, president Bach said at a press conference. “It was a very, very positive surprise. But it followed over a year of constructive discussions.”

The changes that will now be put into action include allowing multi-host Games, lowering the cost of bidding for the Games, an age limit on IOC membership and the launch of an Olympic TV channel. Host City contracts will also be made public and will now include clauses on worker’s rights, environmental protection and discrimination on sexuality.

“So it was encouraging that regardless of their individual interests or positions, they were determined to make Olympic Agenda 2020 a success. Speaking of the members, I have a great deal of respect for them to do this.”

The first recommendation approved relates to reducing the cost and boosting the appeal of bidding. Future bids will now be able to incorporate venues in more than one city and potentially than one country.

This would enable countries with suitable venues in more than one city to avoid investing heavily in new sports infrastructure, which is often met with large-scale public opposition.

The changes were also greeted with approval from a contender for the 2022 Olympic Games.

“Since the start of the 2022 Bid process, the Beijing 2022 Bid Committee has been paying close attention to all developments related to the Olympic Agenda 2020 and strongly supports all its recommendations,” said Madame Wang Hui, spokesperson for Beijing’s bid for the 2022 Winter Olympic Games.

“We highly appreciate the IOC’s approach and will work to implement these reforms.”