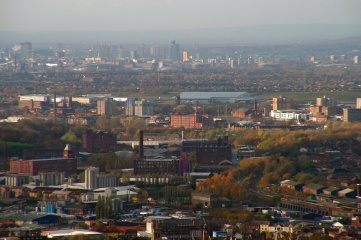 The Expo site would be in Tameside, pictured here with Manchester city centre in the background (Photo: Ian Roberts)

Pressure is mounting on the UK to bid for the 2025 World Expo, with Greater Manchester urging the government to take the opportunity

Manchester in northern England is urging the new UK government, formed after the “Brexit” referendum, to put forward its bid for the 2025 World Expo.

Greater Manchester Combined Authority (GMCA) said it is “encouraging the government to seize the opportunity for a global shop window to demonstrate that the UK is open for business and committed to international trade following the referendum vote to leave the European Union”.

“It’s more important than ever that the UK takes it places on a world stage to compete for investment, exports and visitors,” said Tony Lloyd, interim Mayor of Greater Manchester.

“World Expo 2025 would be the perfect platform on which to do so and we believe Greater Manchester would offer an ideal option."

Other UK cities have looked into staging the event. London conducted a feasibility study following meetings in 2014, while Liverpool was the only UK city to have a presence at the 2010 World Expo in Shanghai.

The UK and any other bidding countries will need to put forward their candidate city by the 31 October 2016.

In the Netherlands, Rotterdam has been working on a bid. The project has the support of Rabobank Executive Board member Jan van Nieuwenhuizen, who says, “Young people want to give meaning to their lives... The Expo should inspire this generation of the future.”

France is considering a bid for 2025 World Expo, with Paris Mayor Anne Hildago and President Hollande having given their support. However, Paris is also bidding for the 2024 Olympic Games and staging both events in consecutive years would be an unprecedented challenge.

The Japanese city of Osaka, which hosted the 1970 World Expo, is also reported to be bidding for the 2025 edition - which would come five years after Tokyo's staging of the Olympic Games.

Toronto, which hosted a successful Pan-American Games in 2015, is also evaluating an Expo bid. However, city mayor John Tory has said he will only back the bid if the government gives assurance that they will cover any shortfall in private sector funding, and local support for such a publicly funded project is just 22 per cent. In order to bid, Canada would also need to rejoin the BIE.

Proponents of the Manchester bid say it is an opportunity to rebalance the national economy by reviving the “Northern Powerhouse” regional development strategy proposed by the previous government.

The Expo would take place on a 250-acre (110 ha) industrial site at Ashton Moss in Tameside, less than 10km from Manchester city centre and within 15km of Manchester airport.

“This bid has already been seen by Treasury who recognise its value but were not at the time of the last budget in a position to back it,” said Jake Berry, MP for nearby Rossendale and Darwen.

“If our new Prime Minister Theresa May is serious about continuing with the Northern Powerhouse it’s big ideas like 2025 Expo that the Government has to give its support to.

“This is a once in a generation opportunity to rebalance our economy and promote the Northern Powerhouse as a global brand. The Government saw fit to spend £9bn on bringing the Olympics to London. This seems to be a better investment.”

The north of England is also working towards the first “Great Exhibition of the North” in 2018, with Blackpool, Bradford, Newcastle-Gateshead or Sheffield due to be named as the host this autumn.

World Expos takes place every five years and last for six months.  The cost of staging the 2025 World Expo in the UK has been estimated to be more than £1bn, but the Greater Manchester Combined Authority points out that recent World Expos have all more than covered costs through ticketing revenues and that “private sector contributions” could be explored for 2025.

The next World Expo will be held in Dubai in 2020. Looking beyond 2025, the Korean city of Busan has already stated its intention to bid for the 2030 World Expo.