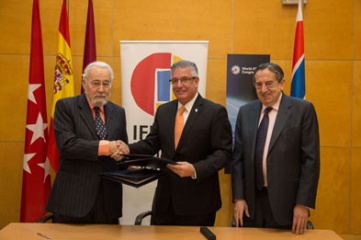 Following a second successful event in Madrid, the World Air Traffic Management (ATM) Congress has announced that event will remain in the Spanish capital until 2017.

The 2014 World ATM Congress, which took place at the IFEMA exhibition centre last week, attracted more than 6,000 aviation and air traffic management professionals – up by more than 1,000 on the inaugural event in 2013.

President and CEO of the Air Traffic Control Association (ATCA), Peter Dumont and the executive chairman of IFEMA, Luis Eduardo Cortes, signed an agreement confirming Madrid as the host city of the World ATM Congress, which will be held at IFEMA for the next three years.

“This year’s World ATM Congress was a tremendous success,” said Dumont. “This was further evidenced by the wide variety of attendees from around the world and from all aspects of the industry. Not only was the event larger – it was better. With 190 exhibitors and visitors from 128 countries, the exhibition floor was rich for business.

“There was clearly a demand for access to the ATM community in an environment that encourages innovation, and we have provided it.”

Jeff Poole, director general CANSO, said: “Once again, World ATM Congress has successfully provided an important and truly global forum for the air traffic management industry and its partners not just in terms of the numbers but also in quality. The success of World ATM Congress reaffirms the strong need and support for a single global ATM forum by the industry for the industry.”

This endorsement from the international aviation industry will be a welcome boost for Madrid’s important hospitality and event sectors. Madrid was placed fourth in the International Congress and Convention Association (ICCA)’s most recent ranking in 2012, just ahead of Barcelona – making Spain the world’s third most popular destination for meetings.

The next World ATM Congress will take place on 10–12 March 2015, bringing together all sectors of the air traffic community.