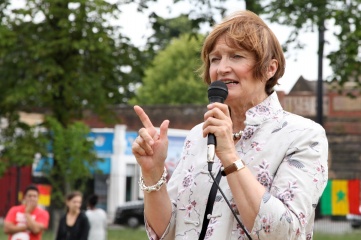 Speaking exclusively to HOST CITY, likely mayoral candidate Dame Tessa Jowell MP says London should make sure the benefits of the 2025 World Expo can be spread around the country before bidding

As London’s City Hall weighs up whether to go head to head with Paris and bid for the 2025 World Expo, Tessa Jowell told HOST CITY that the benefit to the nation as a whole should be a key consideration of a bid.

The former Olympics minister Jowell was a major driving force behind London’s successful Games bid and is a popular contender to become the next mayor of London.

Asked whether she thought London should bid for the World Expo in 2025, Jowell told HOST CITY “It’s not a simple yes or no, but yes, we should certainly undertake the feasibility and be very clear about what the benefits are for London and the UK, beyond the duration of the Expo as an event in its own right.

“You look at every aspect of the development and you say ‘how can we spread the benefit; how can we make sure that businesses outside London know about the possibility of tendering for the contracts?’

London 2012 could set the template here, Jowell indicated. “We avoided displacement from the regions to London’s benefit by ensuring that nearly 50 per cent of the contracts were let to businesses around the country, and the whole country derived benefit.

“Before bidding for the Expo, London needs to ask ‘What’s the possibility of diffusing, dispersing events outside the host city?’

“The Olympics is very strict about that; you have to have a host city, but we were able to have training camps around the country, which gave a bit of Olympic excitement and Olympic magic right across the UK.

“It was a Games that was so true to the city that London is – the greatest city in the world, open, diverse, tolerant – that’s what the Games captured so beautifully, and I think that’s why not just Londoners but people from all around the UK took the Games to their hearts.”

Jowell played a crucial role in evaluating the feasibility of London’s Olympic bid and driving the bid forward.

“My role was to turn my personal belief that this would be great for the country into a proposition that had credibility and could be sold to the whole cabinet, every department of government, all the key supporting organisation and then the chancellor of the exchequer and the prime minister,” she told HOST CITY.

“I set a number of tests against which the proposition could be judged. Was it affordable? Could we deliver it? Would there be a legacy? And could we win the bid against Paris, who was the other key contender at the time?”

President Francois Hollande announced Paris’s candidacy for the 2025 World Expo on 4th November, saying “France is capable of great events, major projects,” with French Prime minister Manuel Valls in October describing the World Expo as a “magnificent opportunity for the image of Paris and of France in the world.”

Dame Tessa Jowell confirmed to HOST CITY that she is seriously considering standing for the nomination as Labour’s candidate to be mayor of London after stepping down as MP at general election on 7 May.

“Now is not the moment for a formal declaration because we have a general election to fight and I hope to win, and that’s what I am focussed on,” she told HOST CITY.

“I think you’ve got to take these things in their natural sequence. The general election is the biggest challenge facing us at the moment.”

A recent YouGov poll showed that Tessa Jowell would not only be the most popular candidate among Labour supporters, but also enjoy the strongest cross-party support.