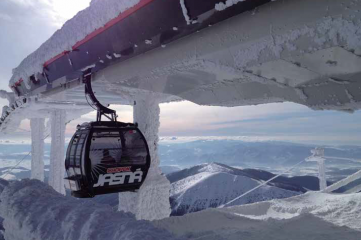 The Slovak resort of Jasná is included in the bid from Krakow, Poland

With applications from five cities, four of whom have never hosted the Winter Olympic Games before, the IOC will have plenty to choose from for its flagship event in 2022

The formal bidding process for the 24th IOC Winter Olympic and Paralympics Games is now well underway with the International Olympic Committee receiving six official applications by its deadline of 14 November 2013.

The International Olympic Committee (IOC)’s recently appointed President Thomas Bach expressed his delight with the applicants. He said “These cities and their supporters clearly understand the benefits that hosting the Games can have and the long lasting legacy that a Games can bring to a region.”

In December 2013, representatives of the six potential host nations attended an orientation seminar at the IOC headquarters in Lausanne. The event, held over three days, served to introduce the would-be hosts to what hosting a modern Games would involve. The applicant cities learned the key criteria against which their applicant files will be judged.

The bidding parties are a mix of traditional and developing winter destinations, with four European cities and two in Asia.

Almaty
azakhstan’s biggest city and the host of the 2017 Winter Universiade was one of the first cities to officially put its name forward, back in August 2013. Almaty had previously applied for the Games in 2014 but did not get past the applicant phase; it also expressed interest for 2018 but did not apply.

Kazakhstan is the largest landlocked country in the world and it is in a region of the world – Central Asia – that has not yet hosted an Olympic Games. It would also be the first former Soviet state to host an Olympics Games.

If successful, this would be the first time China has hosted the Winter Games. The country does have previous experience of bidding for the winter edition, but has not yet got past the application stage. The city of Harbin, which hosted the 2009 Winter Universiade, declared an interest in 2010, 2014 and 2018 but weak infrastructure hampered their progress.

Krakow
The Polish city of Krakow is proposing to bid for the Games jointly with the Slovak ski resort of Jasná.

The Polish Olympic Committee has used experience from Zakapane’s 2006 winter games bid and issues to the alpine events being held in Poland. For this reason the Polish OC will apply together with its Slovak counterpart to deliver the proposed bid with the Alpine events on the Tatra Mountain range.

Every season, Jasná holds FIS (International Ski Federation) alpine events. The 2014 events will take place from the end of February until mid to late March.

Former Winter Snowboarding Olympian Jagna Marczułajtis- Walczak, who is leading the Krakow bid, has asserted that hosting events in neighbouring Slovakia is not in breach of IOC rules.

IOC Rule 35.2 reads that “for the Olympic Winter Games, when for geographical or topographical reasons it is impossible to organise certain events or disciplines of a sport in the country of the host city, the IOC may, on an exceptional basis, authorise the holding of them in a bordering country.”

Lviv
The cultural capital of the Ukraine will also bid for the 2022 Winter Olympics and Paralympics. The city has experience of mega-events, having hosted high profile group-stage matches involving Germany and Portugal at Euro 2012.

If the bid were to be successful, the alpine events would take place 160 kilometres from Lviv in the Carpathian Mountains.

The Ukrainian Olympic Committee member and pole vaulting legend Sergi Bubka is certain to be a key figure in this bid. He came in fifth place in the race for the IOC presidency.

Oslo
The Norwegian capital is the only applicant city from this list that has a previous Winter Olympic hosting pedigree. In 1952 Oslo hosted the sixth Winter Olympic Games, where 30 countries participated in 22 events.

Norway last held the Winter Olympic and Paralympics in 1994 in Lillehammer. For the 2018 Winter Olympics Games, Oslo expressed an interest to host the games with Lillehammer; however, the bid was not progressed for a number of reasons including public support.

A referendum saw a slim majority of Oslo’s inhabitants vote in favour of bidding for the 2022 winter Olympic and Paralympics games.

What next?
The next major milestone in the race to host the 2022 Winter Olympic and Paralympics is the 14th March 2014. By this date, each of the six applicant cities will hand in their application files to the International Olympic Committee. In July 2014, the successful applicants will then be named as official candidate cities for the 2022 Winter Olympic and Paralympics. The winning bid will be announced in Malaysia at the Kuala Lumpur convention centre at the 127th IOC session on the 31st July 2015. But winning isn’t everything. As Bach said: “While recent Games have left an array of sporting, social, economic and other legacies for the local population, many cities that did not go on to win the right to host the Games have also noted benefits as a result of their bids.”