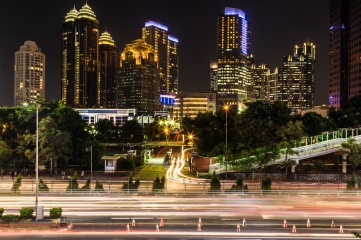 The Indonesian capital now looks set to replace Hanoi as host of the Asian Games in 2018.

On a visit to Jakarta, the OCA’s vice president Wei Jizhong has endorsed Indonesia’s readiness to host the Asian Games in 2018.

The Indonesian capital of Jakarta is on track to be named as the surrogate host city for the 2018 Asian Games, according to various media reports coming from the country.

The Vietnamese city of Hanoi was originally selected as the host by the Olympic Council of Asia (OCA) until the government withdrew from the Games in April citing concerns over financial viability and a lack of preparation.

New Delhi was originally considering a bid to host the Games as a replacement for Hanoi but missed a deadline set by the OCA to enter their bid. Various Asian media organisations are now reporting the OCA has settled on Jakarta as the best replacement for Hanoi following inspections of the city by honorary vice president Wei Jizhong.

Jizhong has reportedly said that Jarkata’s infrastructure already meets the set requirements and is almost ready to host the Games but may co-host the event with the city of Palembang.

This is despite previous claims by the Jakarta Deputy Governor, Basuki Tjahaja Purnama, that the city would require the construction of mass and light rapid transit systems, loop lines for electric trains, six toll roads and improvements to the city’s public bus network before it will be ready to host the games.

However, Jakarta already has a range of sporting venues built in the city and surrounding regions meaning only a limited amount of large scale construction work would be required to hold the event.

Indonesian Olympic Committee chairperson Rita Subowo was joined by Jizhong on the inspection of the country’s potential Games facilities which included Gelora Bandung Lautan Api stadium which could be used for the football tournament.

HOST CITY asked the OCA for more details about the bidding process and other candidates to host the Games, but the organisation declined to comment.