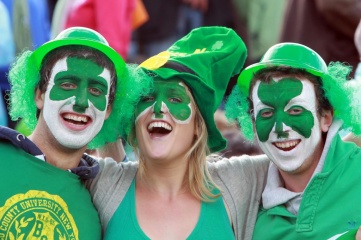 The bid highlights Ireland's large international fan base as an asset (Photo: Ireland 2023)

Ireland has delivered its candidature file to World Rugby, aiming to stage the Rugby World Cup for the first time in 2023

Ireland has submitted its formal bid document to host the 2023 Rugby World Cup, promising a “tournament like no other, full of Irish spirit, that will capture the imagination of the world and help to drive Rugby’s global momentum.”

Ireland, which has never hosted the tournament before, are joined by former hosts South Africa and France in the race to stage the major international event.

Ireland’s 990-page file set out the candidate’s attributes as a host for the Rugby World Cup in 2023 (RWC 2023), including all the key Government commitments required by World Rugby, promises of “unprecedented commercial success” and the ability to “unlock and engage new audiences for Rugby, including through the infrastructure of the worldwide Irish Diaspora.”

The bid includes a full commitment from the Government of Ireland and the Northern Ireland Executive to support RWC 2023 as required by Rugby World Cup Limited, including paying the GB£120m tournament fee.

The tournament is said to a priority for the island of Ireland, which comprises the Republic of Ireland and the UK nation of Northern Ireland, who compete as a united team in the sport internationally.

Projecting an overall positive economic impact on the island of Ireland of more than €1.5 billion, the bid highlights the event as Ireland’s “sole focus in terms of a major international sporting event” from the turn of the decade.

In contrast, the French capital of Paris is currently bidding for the 2024 Olympic Games and the 2025 World Expo. South Africa earlier this year withdrew from hosting 2022 Commonwealth Games.

Ireland’s candidature file was submitted to World Rugby headquarters in Dublin by a delegation led 11 year old “bid kid” Alex Place from Co. Antrim – one of 120 children carrying flags to represent every rugby playing nation of the world. He said “It is a great honour to present this bid document to World Rugby on behalf of all the people of Ireland.”

Dick Spring, Chairman, RWC 2023 Bid Oversight Board, said: “This bid represents the hopes and aspirations of the entire Island and is focussed very firmly on the future, as symbolised by the children who were front and centre of the bid submission today.

“It presents World Rugby with a compelling proposition that combines all the advantages of a traditional Rugby market with the many opportunities of a new one.

“Rugby is hugely popular in Ireland and growing, from this platform Irish sports fans will light up the tournament in the manner they have lit up so many international events around the world over the years, making it memorable for all.

“This bid is grounded in certainty through: unparalleled Government support; the availability and suitability of sold out, iconic stadiums set in the heart of cities and towns; and, of course Ireland’s unrivalled access, through our diaspora, to the North American market. When one adds to that our massive tourism infrastructure one is guaranteed  a tournament like no other for world rugby, visitors and home supporters alike.

The Taoiseach, Enda Kenny, said: “This Bid has the total support of the Irish Government. We can guarantee that Ireland has the capacity to deliver a wonderful Rugby World Cup in 2023 which will have the backing of people throughout the island. We will welcome the world to our shores and encourage interest in the game of rugby like never before.”

Sir Malcolm McKibbin, Head of the Northern Ireland Civil Service said: “This is a historic day. The Rugby World Cup is one of the largest sporting events on the planet. North and south we are passionate about this magnificent sport that brings people together. We are united across the island behind this bid to host the event in 2023 which would give us an unprecedented opportunity to showcase our sporting talent and world class tourism on a global stage.

“In Northern Ireland we have been punching well above our weight for many years when it comes to hosting events with a worldwide audience and I genuinely believe that this bid has what it takes to deliver a spectacular event. I want to pay tribute to everyone involved in putting together the bid which exemplifies the strength of partnership working throughout the island.”

Shane Ross TD, Minister for Transport, Tourism and Sport said: “Today is the culmination of almost five years of work since the IRFU first explored the idea in the aftermath of the 2011 Rugby World Cup, work by the IRFU, the Government, our counterparts in the Northern Ireland Executive, and many unsung people working very hard behind the scenes.  I am fully confident we have put in a bid that best reflects Ireland’s strengths, attributes, and our capacity to host a tournament that would do Ireland and World Rugby proud.”

Stephen Hilditch, President, Irish Rugby Football Union: “Ireland has never hosted a Rugby World Cup and we believe choosing Ireland as a first-time host would be a forward-looking step for World Rugby and a signal that Rugby is a truly global game for all. We were inspired to mount this bid by New Zealand’s wonderful hosting of the 2011 tournament and believe that our ‘Global Stadium’ concept will bring a unique cultural dimension to the tournament, acting as a powerful catalyst to Rugby’s worldwide growth.”

“Our bid combines the operational benefits of a small, but dynamic and influential island with the exciting possibilities of an unprecedented international reach for World Rugby. It is a thrilling prospect for all.”